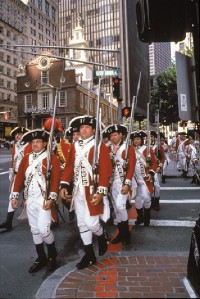 Independence Day in Boston is celebrated at a mammoth bash called Boston Harborfest, a six-day patriotic extravaganza that crescendos to a dynamic fireworks display on July 4. Harborfest has been a favorite of Bostonians and visitors for a quarter-century. Celebrants dress the Cradle of the American Revolution with bright trappings of pageantry as Boston revels in its colonial past.

There are more than 200 events at the waterfront and downtown areas, including walking tours, lectures, reenactments, and alfresco concerts, plus perennial favorites such as the Chowderfest, Children's Day, tours of the Boston Harbor Islands, and the arrival of the USS Constitution, also known as "Old Ironsides," complete with working cannons. About half the events are free.

At the Harborfest, make your way through crowds of loyalists, royals, and patriots to a favored spot such as the Massachusetts Avenue Bridge to hear the Boston Pops play the 1812 Overture (with traditional cannon fire and church bells). Then watch the fireworks blowout on the Esplanade, the long stretch of parkland along the Charles River.