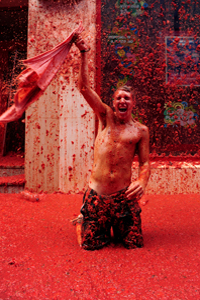 The late comic actor John Belushi is known for his many film roles and as a key player in the early years of the sketch comedy TV show "Saturday Night Live" (SNL). Belushi made his name in classic roles like Jake Blues of "The Blues Brothers" and legendary SNL characters like the samauri deli worker and the bumble bee. And while all of these comic roles stood out, Belushi may be best known as the drunken college student from "Animal House" who started the famous food fight in the cafeteria scene. That cinematic culinary melee may have been frowned upon by Dean Wormer, but there are real, organized food fights that take place all over the world every year.

The mother of all of these food fights is the La Tomatina Tomato Fight. This is the largest food fight in the world and it takes place on the last Wednesday in August each year in the small town of Bunol, Spain, near Valencia. The fight has gotten so huge that as many as 30,000 participants descend on Bunol to hurl squished tomatoes at each other. An entire week is dedicated to a festival with music, food, revelry and, yes, lots of tomatoes. On Wednesday, you'll be hard pressed to get anywhere near the town center, where truckloads of tomatoes are brought in for the big fight. But don't worry, from about noon to 1 p.m., chances are, you can be just about anywhere in town and get in on the action.

We'll take a look at the history of the world's largest food fight on the next page, as well as offer up some tips if you want to take part. Here's a hint -- don't wear your Sunday best. 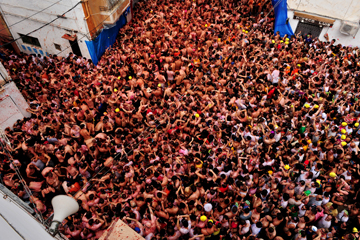 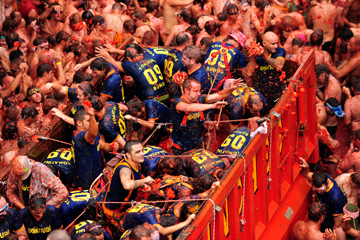