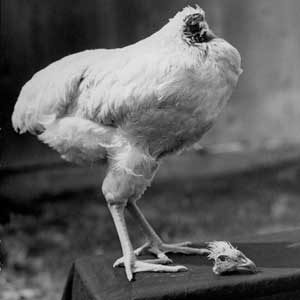 Following a non-lethal decapitation, Mike the headless chicken lived for 18 months. Seen here about one month after his beheading, Mike poses with his severed head.
Time & Life Pictures/Getty Images

On a September day in 1945, Fruita, Colo., resident Lloyd Olsen set out to his barn to fetch dinner. His chicken, Mike, was on the menu that evening. Olsen's mother-in-law would be dining with the family, and her favorite part of the chicken was the neck. So Olsen attempted to slaughter the chicken while keeping its neck intact. He carefully positioned the Wayodette rooster to preserve its neck, swung his ax and took off Mike's head.

But Mike didn't die, and the next morning, Olsen found him pecking for food. Olsen discovered that he had accidentally left one ear and Mike's brain stem intact. He'd missed Mike's jugular vein, and a blood clot kept Mike from bleeding to death. Although Mike was entirely headless with no face or mouth -- in fact, Olsen kept Mike's head in a jar -- he was able to live because the brain stem controls a chicken's reflexes. Impressed by the creature's will to live, Olsen began feeding Mike with an eyedropper, and the chicken survived another 18 months.

To this day, the town of Fruita, Colo., celebrates Mike with the annual Mike the Headless Chicken Days festival. Every year during the third weekend of May, the town gathers to commemorate Mike's indomitable spirit with events like a "Chicken Dance" contest, chicken recipe competition and the 5K Run Like a Headless Chicken Race.

Next, speaking of not dying ...