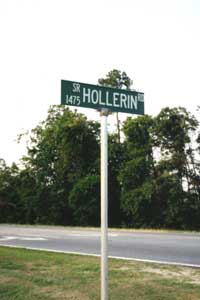 Do you have a set of windpipes that can call folks from far and wide? If so, you might want to attend the National Hollerin' Contest held in Spivey's Corner, N.C. On the third Sunday of June each year, this otherwise sleepy town -- population 49 -- located in Sampson County in southeastern North Carolina welcomes 5,000 to 10,000 people to witness the best holler.

Hollerin' is much more than mere screaming or calling. Contestants use their voices like musical instruments, and the type of holler celebrated in Spivey's Corner consists of quick shifts between a natural and falsetto voice. Many people believe hollerin' is an important cultural artifact, and in fact, the contest began in 1969 when Ermon H. Godwin and John Thomas, co-founders and participants in the festival, wanted to stage a revival to preserve and celebrate the lost art of hollerin'.

Hollerin' has existed worldwide for centuries in one form or another, and each culture uses hollers for different reasons. For example, yodelers on the mountainsides of Europe used their unique form of hollerin' to communicate from peak to peak. In the Southeast United States, particularly in the area around Spivey's Corner, anthropologists have traced hollerin' to people living in colonial slave communities who worked on rafts and would holler to signal each other.

Although for the most part hollerin' no longer serves such practical purposes, it's still celebrated. The Spivey's Corner contest features the following types of hollers:

Due to the differences in men's and women's voices, a separate callin' contest for women was introduced in 1976. So hollerin' is a men-only contest. Contestants are judged according to how well they can belt out the Spivey's Corner type of holler. So far, all winners have been from Sampson County with the exception of one from neighboring Wayne County. But the Hollerin' Contest is open to locals and visitors alike. Winners of the contest have been featured on "The Tonight Show" and "The Late Show with David Letterman."

In addition to hollerin', the festival features pageants and other feats-of-strength, including a watermelon roll, biggest bell pepper contest, whistlin' and lady callin' contests, and a square dancing jamboree.