by Amy Hunter
Prev NEXT
2 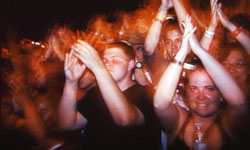 The crowd takes in the music at the Coachella Valley Music and Arts Festival on April 27, 2008.
Rick Gershon/Getty Images

This three-day music festival is held on earth more accustomed to the gallop of horses -- the polo grounds in Indio, Calif. The music event features a wide range of genres, including alternative rock, hip-hop and electronic music. Artists also attend Coachella with sculpture and installation art. The first Coachella festival was held in October, but the weather in the desert climate was unbearable for fans. So the next year, the festival was moved to April, a more hospitable time for an outdoor event.

Coachella has been somewhat of a cupid for bringing together bands that have broken apart -- Jane's Addiction and Iggy Pop and The Stooges have reunited at the festival in the past. Coachella is known for its continuous live music and strong lineup.

Incidentally, if you'd like to stick around for a second festival after Coachella ends, Stagecoach, a country music festival, is also held at the Empire Polo Club.