Browse the article 8 Crazy Facts About the Washington Monument 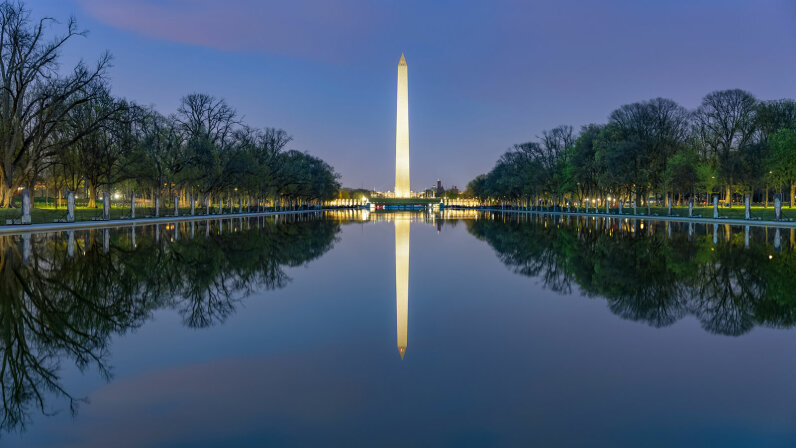 The National Park Service calls the original design plan "audacious, ambitious and expensive," which explains why all but the obelisk was eventually scrapped. Enzo Figueres/Getty Images

On Sept.19, 2019, the Washington Monument reopened to the public after a three-year renovation. Eager tourists got in line early to experience the zippy new elevator and take in one of the best views East of the Mississippi.

The Washington Monument is an impressive structure dedicated to an American icon, but its construction was less than smooth (it was actually derailed for decades by a political coup). Here are eight surprising facts about America's favorite obelisk.

1. A Memorial for Washington Was Planned Way Before He Died

It's hard to overstate how much Americans loved George Washington. As early as 1783, when Washington was very much alive, plans were in the works for erecting a large statue of the first president on horseback near the Capitol building. In fact, the architect of Washington, D.C., the French landscape engineer Charles Pierre L'Enfant, left an open place for the statue in his drawings. And that's almost exactly where the Washington Monument sits today.

Congress failed to act on the equestrian statue, and even after Washington died in 1799, legislators couldn't agree on what kind of monument best suited the national hero. Frustrated with congressional feet-dragging, a private organization called the Washington National Monument Society was formed in 1833 to raise money and solicit designs for a large-scale homage to America's beloved first president.

2. The Original Design Was a Mashup

In 1836, the Washington National Monument Society announced a design contest for the future Washington Monument and the winning sketch was submitted by 29-year-old architect Robert Mills, who would go on to design the U.S. Post Office, the Patent Office and the Treasury Building.

Mills' original design was a mashup of architectural references. First, there was to be a 600-foot (182-meter) obelisk with a flattened top, a nod to the Egyptomania that had captured the early 19th-century imagination. (Note that soon after Washington's death, the House of Representatives proposed the construction of a marble pyramid, 100 feet on each side, to serve as the first president's mausoleum. The pharaohs would have approved, but Congress didn't.)

In Mills' original sketch, the giant Egyptian obelisk was to be encircled at its base by a neoclassical temple with 30 towering columns. On top of the circular temple would be a statue of Washington on a chariot, and in between each of the 30 columns would stand statues of 30 different revolutionary war heroes.

The National Park Service calls Mills' original plan "audacious, ambitious and expensive," which explains why all but the obelisk was eventually scrapped.

3. There's a Zinc Time Capsule in the Cornerstone

An estimated 15,000 to 20,000 crowded the National Mall to witness the laying of the Washington Monument's cornerstone on July 4, 1848. But first the 24,500-pound (11,113-kilogram) hunk of pure white marble had to be dragged through the streets on a cart with bystanders grabbing lengths of rope to help the cause.

After a droning two-hour speech by the Speaker of the House, the assembled dignitaries placed mementos in a zinc box that would be sealed in the monument's cornerstone for eternity (or until an alien race plucks it from the ruins of Western civilization). Included in the zinc time capsule were copies of the Declaration of Independence and the Constitution, a portrait of Washington, an American flag, all the coins in circulation and newspapers from 14 states. The laying of the cornerstone was performed by a grandmaster of the masonic lodges and its actual location apparently is still a mystery.

4. Construction Was Stalled by the Pope's Stone Saga

The unfinished stump of the Washington Monument, as it looked for over 25 years. During the U.S. Civil War, the site was used for the grazing and slaughtering of government cattle, earning it the nickname Beef Depot Monument.
Mathew Brady/Library of Congress

By 1856, after eight years of slow and painstaking construction, the obelisk stood 156 feet (47 meters) high and would remain that way — an unfinished eyesore that Mark Twain called "a hollow, oversized chimney" — for the next 21 years. The reason, weirdly enough, had to do with the Pope.

In 1853, the Washington National Monument Society was dangerously low on funds, so they came up with a scheme whereby large donors could have a commemorative stone placed in the interior of the obelisk. One of those donors ended up being Pope Pius IX, who shipped over a 3-foot (91-centimeter) piece of marble from the Temple of Concord in Rome.

The Pope's gift really ticked off members of the new "Know-Nothing" party, who were virulently anti-immigrant and anti-Catholic. On the night of March 6, 1854, a gang of men locked the night watchman in his shed and stole the Pope's stone, allegedly tossing it in the Potomac.

The controversy over the stolen stone brought donations to a standstill. But even worse was what happened next; a contingent of Know-Nothings staged a coup and overthrew the leadership of the Monument Society. Donations dried up entirely and the Know-Nothings only managed to add 20 more feet (6 meters) to the obelisk by the outbreak of the Civil War, when construction was halted altogether.

After the Civil War, during which the grounds of the stubby Washington Monument were used as a cattle yard and slaughterhouse, Congress finally decided to take over. On July 5, 1876, in time for the centennial celebration of the Declaration of Independence, Congress appropriated $2 million for the completion of the monument and construction resumed in 1877.

The first task of the new chief engineer, Thomas L. Casey, was to reduce the total height of the obelisk to 555 feet (169 meters), exactly 10 times the width of the structure, and to spend years reinforcing the foundation with concrete.

The next issue was the masonry. The original quarry in Baltimore had shut down, so Casey tried shipping down rock from Massachusetts. But after placing only a few layers of this stone, it was clear that it was a different color and of poorer quality than the original. So, the builders changed tack yet again and brought in stone from another Baltimore quarry, which was used to finish the final two-thirds of the obelisk.

The result is that the Washington Monument is nearly white on the bottom, a tannish-pink on the top with a thin belt of light brown in the middle. Classy, Casey.

6. The Priceless Capstone Would Cost a Few Bucks Today

Construction of the obelisk was finally completed on Dec. 6, 1884, more than 36 years after the first cornerstone was laid, with the ceremonial setting of the capstone. When you think of precious metals befitting the capstone of a 555-foot monument dedicated to the nation's greatest hero, you think of gold, maybe silver, but certainly not aluminum.

Yet back in the late 19th-century, pure aluminum was a very rare commodity, and it was chosen for this important feature, as the metal would not tarnish. (In 1884, aluminum costed $1.10 per ounce or $26 per ounce in 2019 dollars; in 2019, aluminum costed around 78 cents per pound.) The 100-ounce (2.8 kilogram) aluminum capstone for the Washington Monument was the largest single piece of cast aluminum in the world. The final cost of the Washington Monument was $1.18 million in 1884 or nearly $30 million in 2019 dollars.

Before the capstone was shipped to Washington, D.C., it went on exhibit on the showroom floor of Tiffany & Co. in New York City, where visitors could say they "jumped over the Washington Monument." Yay!

7. For Five Glorious Years, It Was the World's Tallest Manmade Structure

And then Eiffel built his silly tower in 1789, which at 1,063 feet (324 meters) is nearly twice as tall as the Washington Monument.

The height limits on buildings in the District of Columbia were established by the Height of Buildings Acts of 1899 and 1910, which were primarily concerned with the fire safety of new construction methods that allowed buildings to be raised to incredible new heights. The laws, which are still on the books in D.C., restrict the height of buildings to the width of the street in front of them, which is 130 feet (40 meters) in most places and 160 feet (49 meters) on Pennsylvania Avenue.

8. Half a Million Tourists Ride Up the Monument Every Year

The Washington Monument is one of the most popular tourist destinations in Washington, D.C., and untold millions of people visit the monument grounds every year. But given that there's only one elevator that zips people to the observation deck, only 55 people can be admitted into the monument every half hour. That means that around 500,000 people enjoy the spectacular view from the top of the Washington Monument every year.

The newly installed elevator system will only take 70 seconds to carry visitors to the 51-story observation deck, where they will take in panoramic views of the National Mall, the Capitol Building, the White House and the wilds (suburbs, actually) of Virginia and Maryland up to 25 miles in all directions on a clear day.

Now That's Cool
The first tourist elevator was installed in the Washington Monument in 1889, just five years after its completion.