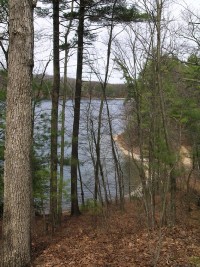 Henry David Thoreau moved to Walden Pond to get a little peace and quiet and to write. He wrote an account of his time in the cabin he built by the pond and called it Walden; or, Life in the Woods. His little book, often credited with creating the conservation movement, changed the world. "I lived alone, in the woods, a mile from any neighbor, in a house which I had built myself, on the shore of Walden Pond, in Concord, Massachusetts, and earned my living by the labor of my hands only," wrote Thoreau. He lived by the pond for two years, two months and two days, and then moved back in with Ralph Waldo Emerson and Emerson's family.

In Thoreau's day, the land around the pond was one of the few woods left in the area, which was surrounded by farmland. Today, Walden Pond is part of Massachusetts's Walden Pond State Reservation, which includes the 61-acre pond plus another 2,680 acres known as "Walden Woods." The park preserves Thoreau's temporary homesite; the original chimney was discovered in 1945, and a replica of the house was built there. Travelers can also linger at the statue of Thoreau, the reservation's The Shop at Walden, or Tsongas Gallery. But check in advance: Only 1,000 people are allowed in at a time.