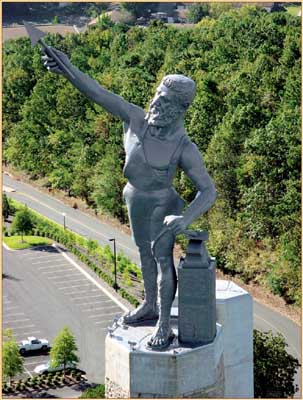 The 56-foot statue of Vulcan in Birmingham, Alabama, is the largest cast-iron statue in the world. The creation of the glorious sculpture is tied closely to the roots of the city. Birmingham began as a mining town for coal, limestone, and iron ore, which were forged to make steel.

By the 20th century, it was a formidable industrial power, and the city's business leaders sought to promote Birmingham. Their audacious answer was to have Italian sculptor Giuseppe Moretti create a cast-iron sculpture of Vulcan, the Roman god of fire, volcanoes, and the forge.

The sculpture was unveiled at the 1904 St. Louis World's Fair, where it was a hit and won the mining and metallurgy exhibition grand prize. Unfortunately when the statue was moved back to Birmingham, its arms were reassembled improperly. The statue was neglected and became a three-dimensional billboard, cradling giant-size Heinz pickle jars and even sporting painted-on jeans.

In 1939, Vulcan was finally moved to his proper place on Birmingham's Red Mountain.Restoration of the statue was completed in 2004, and Vulcan Park reopened for the statue's centennial. Today the statue and its panoramic view come closest to fulfilling Moretti's original vision of a brawny, ambitious Birmingham.