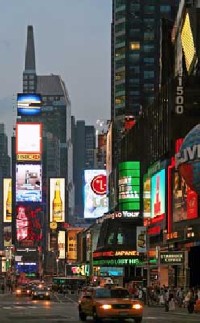 Families flock to Times Square for distraction and fun.

Times Square outpaces Las Vegas when it comes to neon and electric razzle-dazzle. Formerly known for its adult-oriented entertainment, Times Square has been completely transformed and it is now filled with family attractions of all kinds, day and night.

Toy giants such as Toys "R" Us have added entertainment attractions to their megastores headquartered here. They have a 60-foot-high indoor Ferris wheel and a 34-foot-long animatronic T-Rex.

The flagship Disney store is now in Times Square, and the ESPN Zone restaurant has sports activities such as virtual golf and virtual boxing. Madame Tussaud's Wax Museum is another family favorite, as is Mars 2112, a theme restaurant that takes you to your seat in a spaceship. Even if you don't plan to eat there, it's worth a look.

Several television studios tape shows right in the heart of the action. MTV films TRL (Total Request Live) here, and hordes of kids line up to get into the studio. The studio is located just above the MTV store, and many shows are filmed on its balcony. Times Square visitors can also look into the studios of ABC's Good Morning America to see the show being taped, and occasionally the cast comes out to visit with the crowd.

Some of New York's most unique street entertainers hang out in Times Square around the ticket booths or in Times Square station. And, if that's not enough, there are arcades filled with laser tag and virtual reality games.

Popcorn shops offering dozens of toppings, ice-cream stores doing much the same, restaurants of every ethnicity, and the ubiquitous hot dog stands and pizza vendors line the lively streets. Other attractions, such as the Children's Museum of Manhattan, American Girl Place, and the Build-a-Bear Workshop, are within walking distance.

There are plenty of family-oriented Broadway and off-Broadway shows playing at all times of the year, but the Disney-sponsored New Amsterdam Theatre is a Broadway house completely dedicated to children's entertainment. It offers a sophisticated mix of theater, dance, circus arts, comedy, music, and puppetry all year long. There are workshops in juggling and physical comedy, puppetry, choreography and dance, joke-telling, and stand-up comedy as well.

Just north of Times Square, on 6th Avenue between 50th and 51st, is Radio City Music Hall, home of the Rockettes. Radio City offers flashy Rockette shows during holiday periods, and behind-the-scenes tours of this restored Art Deco theater all year long. If you walk along Broadway to get there, look back at Times Square for a great view of all of the billboards and the building where the crystal ball is dropped on New Year's Eve.