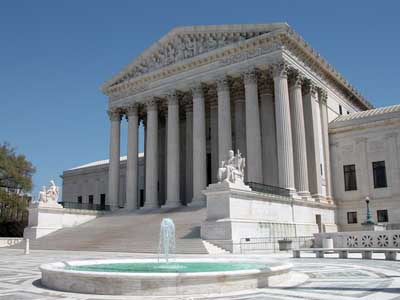 Eight rows of pillars line the front of the Supreme Court building on Capitol Hill.

The Supreme Court of the United States is the highest court in the nation. Appointed by the president and confirmed by the Senate, the Supreme Court consists of a chief justice and eight associate justices. The justices serve for life, or at least until retirement, and no justice has ever been impeached.

The Supreme Court was established in 1789 by the U.S. Constitution, but it has only occupied the building across from the U.S. Capitol since 1935. Designed by celebrated architect Cass Gilbert, the building is sheathed in marble that was quarried in the United States. On the front, eight rows of imposing pillars stand under the chiseled motto, "Equal Justice Under Law." Inside the courtroom, however, Gilbert decided domestic marble was not good enough for the highest court in the land and would settle for nothing less than the finest marble from Italy's lauded quarries. In this setting, the nine justices make decisions that have shaped and will continue to shape the country.