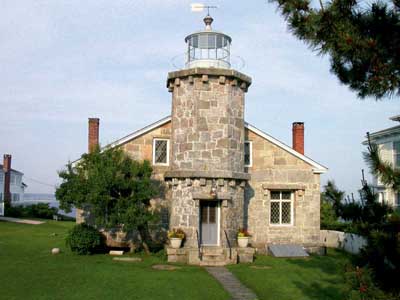 In 1927, the Stonington Borough Lighthouse was converted to a museum honoringthe maritime history of this quaint coastal village.

The town of Stonington is the oldest borough in Connecticut (Stonington Borough), settled in 1753 and chartered in 1801. Both the lighthouse and the town represent the history and architecture of an archetypal Connecticut town. The Stonington Borough Lighthouse Museum is in the restored 30-foot granite tower, which looks as much like a fort as a lighthouse. The beacon was first built on Stonington Point in 1823 to guide the many vessels approaching Stonington Harbor from Long Island Sound.

While the original lighthouse eroded and was dismantled, materials from it were saved and used to build the current lighthouse, which was completed in 1840. The lantern was visible up to 12 miles at sea thanks to its 10 oil lamps and parabolic reflectors. The lighthouse museum is a gateway to Connecticut's past. Six rooms of exhibits testify to the rich and varied history of this coastal region, notable for its Stonington stoneware, which is characteristically splashed with cobalt blue and was made between 1780 and 1834 from clay imported from New York and New Jersey.

The museum also features furniture and portraits that give visitors a peek at the lives of the early blacksmiths, potters, farmers, fishers, merchants, and shipbuilders who lived in Connecticut. One notable portrait is of David Chesebrough, called "King David" in Newport, Rhode Island, for his dominance of the merchant trade. It was painted by John Smibert in Newport in 1732, and hangs over the main room's fireplace mantel. Mystic, Connecticut, with its Mystic Seaport, is about ten minutes away.