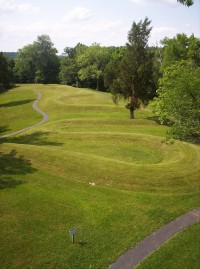 Serpent Mound, a winding mound of earth one-quarter mile long and three feet high, remains a mystery despite all the science that has been thrown at it. There are many Native American mounds in North America, but Serpent Mound State Memorial, near Peebles, Ohio, is the largest prehistoric animal effigy, or image, in the world.

Snakes were important in the art and religion of the Maya of Mexico, the Navajo, the Hopi, and other Native American tribes. But what, if anything, that has to do with the mystical Serpent Mound is unknown. Serpent Mound uncoils in seven curved stages along a bluff over Rush Creek in Ohio and is completed by an oval that appears to represent the head and mouth of the serpent. Some believe that the serpent's head points toward the summer solstice.

Park archaeologists say that the builders carefully planned the serpent's form, outlined it with stones, and then covered it with baskets of earth. There are neither signs of burial nor aboriginal civilization. The mystery continues: Serpent Mound was created on a rare raise called a "cryptoexplosion structure" -- in other words, a bluff created by a big bang that remains, naturally, a mystery.