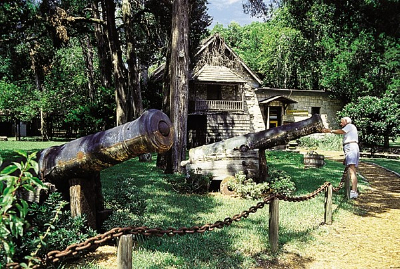 Its beaches are legendary stretches of talcum-soft sand bordered by calm, blue water. But St. Augustine, Florida's real claim to fame is that it is the oldest permanently inhabited city in the United States.

Founded in 1565, it's filled with reminders of its early Spanish history. At the edge of the ocean is an authentic fort, Castillo de San Marcos. Construction of the fort began in 1672, and it was completed in 1695. It boasts an impressive moat, drawbridge, and huge cannons atop which kids can sit.

The walls of the fort are constructed of coquina, a limestone material composed of broken seashells and coral. Thanks to this durable substance, the fort remained impenetrable during 300 years of enemy fire and violent storms. It once helped guard St. Augustine from pirate raids. Later, supporters of the American Revolution were locked away in its dank and creepy dungeons.

Wander through the narrow, picturesque streets of the town's carefully restored Spanish quarter for a glimpse of how this community of Spanish soldiers, settlers, craftspeople, and families lived in the 18th century. You'll see narrow cobblestone streets, the oldest wooden schoolhouse in the country, and Ponce de Leon's Fountain of Youth.

There are also a number of 17th- and 18th-century buildings housing ice cream parlors and shops staffed by costumed interpreters who reenact life in the 18th century. A carriage tour is a great way to see the historic district, and drivers are always willing to share stories of the city's past.

The town's best beach is located on Anastasia Island across the Bridge of Lions. Here, palms and sea oats grow wild along the dunes. The warm water is shallow for many yards out, making it one of the safest places for toddlers to swim since there are no drop-offs. Older children like to ride its gently rolling waves on floats and boogie boards.

The St. Augustine Alligator Farm and Zoological Park, in operation since the late 1800s, features crocodiles, caimans, and alligators of all sizes lolling around their enclosures. A boardwalk across a lagoon lets you observe birds, turtles, and alligators swimming in a natural setting. Other interesting reptiles, such as giant Galapagos tortoises, wander about. Shows feature alligator wrestling, snake wrangling, and other crowd pleasers.

The St. Augustine Ripley's Believe It or Not! Museum was the first in the nation. It is located in Castle Warden, a historic Moorish Revival-style mansion built in 1887. The curiosities in it that kids like best are the ones that make most adults squeamish -- the more gruesome the better -- such as shrunken heads and other human oddities.

On a rainy day, you may head to the St. Augustine Lighthouse & Museum. Children enjoy climbing the tight spiral stairway to its top, where they're rewarded with expansive views of the area. On the way up, catch your breath on each floor and peruse the exhibits on the history of the lighthouse.