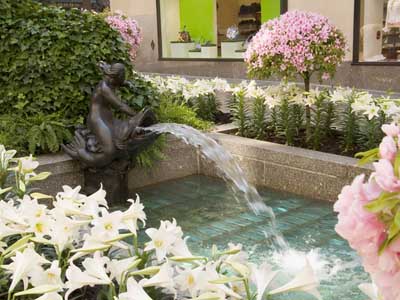 Fountains and decorative foliage add a touch of serenity to Rockefeller Center.

Midtown Manhattan's Rockefeller Center is a complex of 19 commercial buildings a few blocks south of Central Park. The center is a shopping mall, an Art Deco icon, a winter wonderland, the backdrop for a television network's morning program, and the only place on earth where you can nurse a cocktail and watch ice-skaters leap and twirl beneath a big, golden statue of Prometheus.

The center of the complex is 30 Rockefeller Plaza, a 70-story building that towers above the skating rink and the adjacent central plaza. Visitors can enjoy glamorous dancing accompanied by a big band in the Rainbow Room or dine next door at the Rainbow Grill, which provides a glistening view past the Empire State Building through its room-spanning vertical windows. Rockefeller Center is also home to NBC studios, which includes the legendary Studio 8H. Arturo Toscanini, the NBC Symphony Orchestra, and Saturday Night Live have been filmed there.

Visitors to the center can also take a tour or see a movie or stage show at Radio City Music Hall, the largest indoor theater in the United States, where the sky-high-kicking Rockettes have been knocking out audiences since 1932.