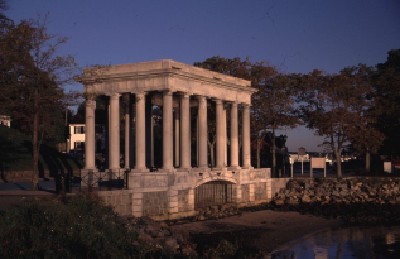 Plymouth Rock marks the site where the Pilgrims were thought to have landed in 1620. See more pictures of Massachusetts vacation destinations.

People flock to Plymouth, Massachusetts, to watch whales, relax on the beach, kayak and see the famous ten-ton granite boulder, Plymouth Rock. Plymouth Rock is hallowed in American history as the place where the Pilgrims set foot in America. They went on to form the first permanent European settlement in New England. While traveling across the Atlantic, they wrote the Mayflower Compact, the New World's first governing agreement, and signed it in Provincetown Harbor. However, the claim that the Pilgrims landed at Plymouth Rock may be just that, since the first mention of the site came nearly a century after the Mayflower landed.

No matter -- this is the accepted spot where leaders John Carver, William Bradford, and some 100 other Pilgrims landed and started Plymouth Colony. About half of the colonists died the first year. "Thus, out of small beginnings...as one small candle may light a thousand, so the light here kindled hath shone unto many," Bradford wrote.