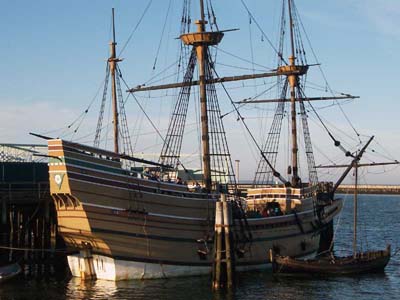 The Mayflower II gives visitors to Plimoth Plantation a chance to view the living conditions on the original boat.

As you stroll the lanes of Plimoth Plantation, it's easy to envision yourself living in this settlement just seven years after the Mayflower landed. Costumed interpreters go about their daily lives as they would have done during the early years of Colonial America -- women plant medicinal herbs and cook meals over a hearth fire, servants milk cows, and children tend to baby animals in the spring. Each person has a story to tell, and they enjoy talking. But if you ask them any questions that have to do with modern life, or for that matter, anything after 1627, you'll receive a blank stare.

The living-history museum has two main components: the reconstructed European village occupied by the Pilgrims and a reconstructed Wampanoag Native American settlement, Hobbamock's Homesite. The homesite explores the life of one 17th-century Wampanoag person, Hobbamock, as well as traditional Wampanoag culture and history. Unlike in the 1627 Pilgrim Village, the interpreters dressed in traditional deerskin clothing in the Native American settlement are actually Wampanoag.

Another part of the museum, a reproduction of the Mayflower on the Plymouth waterfront near Plymouth Rock, is located a few miles away. Children's activities are scheduled throughout the year, with a concentration of fun in the summer.