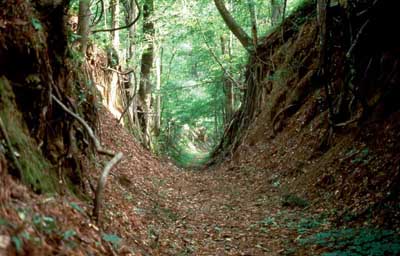 Natchez Trace, which runs from Mississippi to Tennessee, began as a series of tribal trading routes worn into the earth.

Natchez Trace originated thousands of years ago. Big animals such as deer and bison were the first to tramp along what became the Old Natchez Trace. Then the Choctaw and Chickasaw connected the paths, and the trail became the region's premiere trade route. Arriving Europeans grasped its potential, and by the late 1700s the Natchez Trace bustled with boaters. They would sell their cargo and flatboats or keelboats for lumber in Natchez or New Orleans and then travel back north to Nashville and beyond. The boaters carried their money in gold and silver coins, and the Natchez Trace became legendary for its cutthroat gangs.

In 1801, the United States signed a treaty with the Choctaw allowing roads to be built along the route. Today, Natchez Trace has many meanings. It is the 444-mile Natchez Trace Parkway, which follows the road from Natchez, Mississippi, to just outside Nashville, Tennessee. The parkway's one visitor center is located near Tupelo, Mississippi, birthplace of Elvis Presley. Four sections of trails along the parkway make up the Natchez Trace National Scenic Trail. Crimson clover, butterweed, Japanese honeysuckle, ground ivy, and many other species of wildflowers dot the scenery along the parkway. Adventurers can enjoy numerous hiking trails, picnic sites and campgrounds, too.