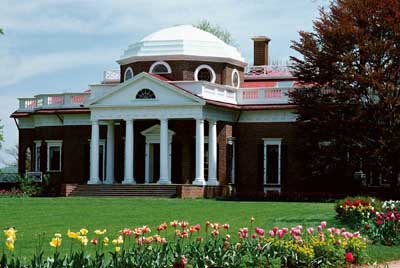 The west front of Jefferson's Monticello may seem familiar -- it was exclusively featured on the back of the U.S. nickel from 1938 to 2003. See more pictures of Monticello.

Monticello, the Virginia home of American founder Thomas Jefferson, is a Roman neoclassical masterpiece. Jefferson moved onto the property in 1770, but the mansion was not completed until 1809, after Jefferson's second term as president. The domed building features east- and west-facing porticos that bookend an entrance hall and parlor. Jefferson, ever the tinkerer and innovator, made all sorts of improvements to Monticello to maximize space and light.

The 43-room mansion has 13 skylights, including one over Jefferson's bed. On the tour of Monticello, you'll have a chance to see Jefferson's mansion up close. The house was the centerpiece of Jefferson's plantation, which totaled 5,000 acres at its peak. About 130 slaves worked the land, tended livestock, cooked, and cleaned there during Jefferson's life.