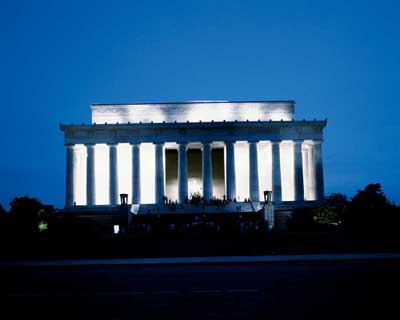 Millions of people come to visit the Lincoln Memorial each year. Here they crowd the steps and look up in awe. The inscription honors the 16th U.S. president.

At the center of the Lincoln Memorial is a sculpture of Abraham Lincoln, seated with resolve but as if reserving judgment. One hand is clenched, one open. His gaze seems to change with the light but remains focused across the Reflecting Pool to the Washington Monument and the National Mall beyond. He seems to look toward the future and not flinch from it. The Lincoln Memorial leads visitors to contemplate what Lincoln accomplished and what he stood for. No poet (including Walt Whitman) and no biographer (including Carl Sandburg) has expressed this as well as Lincoln himself in his addresses at his second inauguration and at Gettysburg. Both speeches are carved into the walls of the memorial. Similar to the Washington Monument, building the Lincoln Memorial was a prolonged process. Congress formed the Lincoln Monument Association in 1867.

The original design was for a 12-foot statue of the Civil War president surrounded by 6 large equestrian and 31 pedestrian statues. But a lack of funding derailed the initial project, and construction on the current memorial didn't begin until Lincoln's birthday in 1914. The memorial was made from Indiana limestone and yule marble from Colorado. It was completed in 1922. It is unlike any other structure on the National Mall.

The choice of a neoclassical Greek rather than Roman design stirred dismay. The memorial is majestic in scale and impressive in its ability to share Lincoln's vision. The base covers roughly the same area as a football field. The statue measures 19 feet wide by 19 feet tall -- its size was sharply increased when sculptor Daniel Chester French realized it would be overwhelmed by the memorial's size.

The building has 36 Doric columns, one for each state during Lincoln's presidency. The memorial has attracted crowds since its creation and has hosted historic gatherings including Marian Anderson's 1939 Easter Sunday concert, an early turning point in the Civil Rights Movement, and Martin Luther King, Jr.'s, "I Have a Dream" speech culminating the historic march on Washington for civil rights in 1963. The words carved into the marble of the Lincoln Memorial long ago came true: "In this temple, as in the hearts of the people for whom he saved the Union, the memory of Abraham Lincoln is enshrined forever."

"With malice toward none, with charity for all, with firmness in the right as God gives us to see the right, let us strive on to finish the work we are in, to bind up the nation's wounds, to care for him who shall have borne the battle and for his widow and his orphan, to do all which may achieve and cherish a just and lasting peace among ourselves and with all nations." --President Abraham Lincoln's Second Inaugural Address