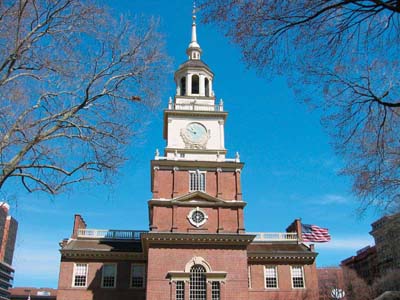 The bell tower atop Independence Hall was the former home of the Liberty Bell.

The seeds of liberty were sown in Philadelphia's Independence Hall. It was here that the Declaration of Independence was signed in 1776, the Articles of Confederation uniting the 13 colonies was ratified in 1781, and the Constitution of the United States was adopted in 1787.

Kids will relate to the history of Assembly Hall, where the Second Continental Congress met to debate whether to remain a colony or fight for independence from British rule. It was here that George Washington was chosen as Commander in Chief of the Continental Army. Your kids will see the table where the Declaration of Independence was signed and the chair in which Washington sat. The Declaration was first read in public in Independence Square a few days after its signing.

The famous Liberty Bell, which is now on display in a pavilion across from the hall, was rung to announce the public reading. A number of other buildings make up Independence National Historic Park. This includes the National Constitution Center, which kids will really enjoy. It's worth a visit to experience its hands-on, high-tech exhibits.

Admission: Free tickets are available at the Independence Visitor Center