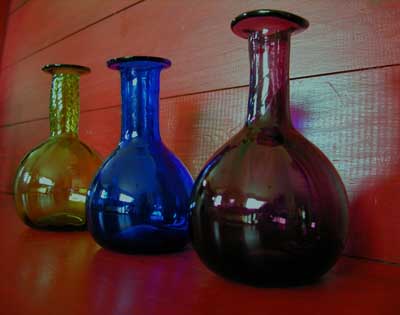 Artifacts unearthed from the first permanent English colony are on exhibit at Historic Jamestowne.

Historic Jamestowne is where the settlers formed the first permanent English colony. Visitors can tour its excavations and the few structures that remain. Archaeologists working at various locations have unearthed a wealth of artifacts. Jamestowne's glassblowing industry is also depicted, with costumed workers applying their skills in the same manner as the early craftspeople.

Nearby is Jamestown Settlement. It features artifacts from the settlement, including a 17th-century child's hornbook, a wooden doll, clay marbles, and a small stoneware jug, dated 1590, which reportedly was given to Pocahontas.

At the Riverfront Discovery Area children are welcome to climb aboard the ships and into the tiny bunks where the sailors used to sleep. They can also try the steering device that was used before wheels came into fashion and learn about early methods of fishing.