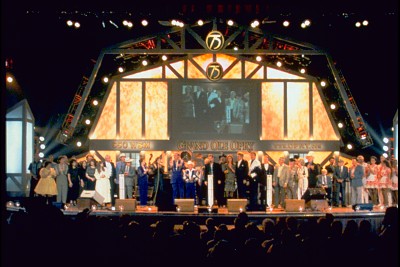 Shows at the Grand Ole Opry are magical to the performers and audience alike.

The Grand Ole Opry is a cultural phenomenon. At its heart, it's a radio program that showcases American country music. In fact, it's the longest-running live radio program in the United States. But country music is just the starting point. The Opry is the centerpiece of Opryland, a comprehensive resort and convention center that covers everything from golf to shopping to, of course, country music.

It all began back in 1925 when a brand-new Nashville radio station, WSM, hired a former Memphis newspaper reporter named George Hay to host a weekly program called the "WSM Barn Dance." In 1927, the show was renamed the "Grand Ole Opry," and its popularity snowballed. By 1932, WSM's new 50,000-watt transmitter blasted the program across the country and even to parts of Canada. Over the years, the Grand Ole Opry has become home to the "Who's Who" of American country music.

The six-foot circle of dark oak wood at the Opry House Stage is magical for the performers and audience. The section was cut from the Opry's former home, Ryman Auditorium, and today's performers feel a connection with the country legends who first sang there. From April through December, the Opry hosts Tuesday Night Opry shows -- a perfect way to take in the heart and soul of country music.