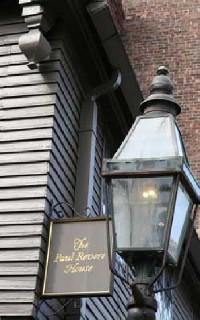 A walk along Boston's Freedom Trail is like a trip back in time to Colonial America. The 16 sites along the trail describe Boston's early patriots, their notion of liberty, and the journey to independence. Exploring the 2.5-mile-long Freedom Trail is a fascinating way to experience Boston's rich history as well as the sights and sounds of the modern city.

A painted red line or red brick path connects the sites and buildings on the trail and serves as a guide on your journey. It begins in Boston Common, one of the nation's oldest public parks, which has a long-standing tradition as a place where demonstrators can exercise their right to freedom of speech without needing a permit. The trail finishes at the Bunker Hill Monument, the site of the Revolutionary War's first major battle.

Children will enjoy the variety of shops and activities at Faneuil Hall, which was built in 1742. It's a good spot for refreshments and people-watching. The house of Paul Revere, who made history with his famous ride warning of the Redcoats' arrival, is the oldest structure in Boston. It was built in approximately 1680 and was purchased by Revere in 1770. Much of the heated debate that led to the Boston Tea Party took place in the Old South Meeting House, another famous point of interest along the Freedom Trail.