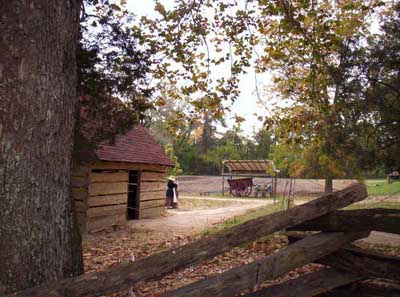 Colonial Williamsburg is the largest living-history museum in the world.

This former capital of colonial Virginia is the world's largest living-history museum. The town appears much as it did during the Revolutionary War. You can explore many of its more than 500 restored and reconstructed buildings: Walk through dank jails, visit elegant government buildings, and tour simple homes and neighborhood taverns.

Many of the quaint shops offer fascinating hands-on demonstrations of trades such as boot-, barrel-, and wig-making. In the homes and taverns, you're likely to see colonials cooking the day's meal over an open hearth. Horse-drawn carriages travel along the immaculate, hard-packed dirt streets, where drum corps march and fifers play.

Interpreters of all ages wander the streets in period costumes, bringing to life the stories of the working people, families, slaves, and revolutionary firebrands who lived here 300 years ago. A staff of 3,500 people, including archaeologists and historians, are helped by more than 800 volunteers who make the 18th century come alive.

You can sample some of the Early American cuisine that is featured in many of the authentic 18th-century taverns, often to the accompaniment of lively period music. You might find mince pies, Yorkshire beef pasties, spoon bread, and apple tansey accompanied by cider and ale on the menu. Many of the restaurants also feature children's menus. After dark, enjoy the candlelit world of early America and stroll along Colonial Williamsburg's streets. Attend a concert or an 18th-century play, or enjoy games and gambols, an old form of entertainment.

Activities for children abound all year: They can help with seasonal farm chores, play colonial games such as ninepins and blind man's bluff, make soap, dip candles, and draw water from a well. Local children working as costumed junior interpreters help visiting kids get into the Colonial spirit. The family fun continues during summer months and over school holidays with a variety of fascinating programs. You might see reenactments of famous trials, colonial and slave uprisings, and contentious town meetings. One popular program takes visitors on a tour of Williamsburg from the perspective of fictional American Girl character Felicity, a spunky nine-year-old who lived in Williamsburg in 1774.

Williamsburg has more than 100 gardens that offer a shady respite from touring. The Governor's Palace Gardens is one of the prettiest and is conveniently situated near an old-fashioned hedgerow maze with plenty of confusing twists and turns that children love to navigate.