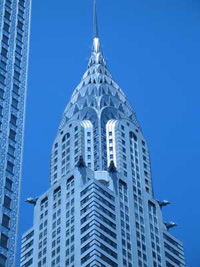 The Chrysler building pierces the sky over midtown Manhattan.

The Art Deco spikes, triangular windows, and gargoyles of eagles and wings were taken from the Chrysler hood ornament's design, and the building's top was modeled after the Chrysler hubcaps. Ever since its opening in 1930, the Chrysler Building has struck observers as the perfect architectural expression of the roaring twenties, which witnessed a fierce competition to build the tallest skyscraper. The contest was so intense that the Chrysler Building, hailed as the world's tallest building by far in 1930, had to yield first place to the Empire State Building in 1931.

Admire the Chrysler Building from a distance, then see its lobby. Then (if you can resist stopping to shop on Madison Avenue), walk to the restored Grand Central Terminal, the New York Public Library, or Bryant Park on 42nd Street. From there on Fifth Avenue, which was originally designed so that its buildings, all the same height, would form a synthetic canyon, look downtown: You'll feel like you're on top of the world.