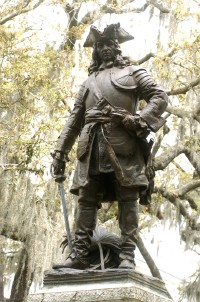 A statue of General James Edward Oglethorpe stands at the center of Chippewa Square in Savannah, Georgia.

Savannah, Georgia, is America's first planned city. General James Edward Oglethorpe (who had previously founded the colony of Georgia) founded Savannah in 1733. He designed his new capital as a series of neighborhoods centered around 24 squares. His layout remains intact today: Twenty-one squares still exist in Savannah. Each has a distinctive architecture, history, and folklore.

Johnson Square, laid out in 1733, was the first Savannah square. Oglethorpe Square, which was called "Upper New Square," was laid out in 1742 by General Oglethorpe. And Orleans Square was built in 1815 in memory of the heroes of the War of 1812.

Chippewa Square is at the center of the downtown historic district between Hull Street and Perry Street. At the square's heart, a statue of Oglethorpe commemorates the founding of Georgia. Excerpts from the original Georgia charter are inscribed on the pedestal, designed by Henry Bacon. Built in 1815, the square gets its name from the Battle of Chippewa in the War of 1812.

By the 1820s, Chippewa Square became Savannah's nightlife center, in part because the Savannah Theatre is just one block north. The showbiz tradition continues to this day: The square served as the backdrop for the famed park-bench scene in Forrest Gump.

What's With the Odd European Replica Towns All Across the United States?
The Great Buddha
4 Paranormal and Other Strange Roadside Attractions