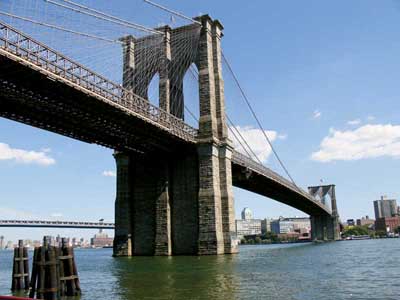 "That's the first mistake we've made since that guy sold us the Brooklyn Bridge," Stan Laurel says in the film Way Out West. "Buying that bridge was no mistake," rebuts Oliver Hardy. "That's going to be worth a lot of money to us someday." The Brooklyn Bridge opened on May 24, 1883, linking what would become the boroughs of Brooklyn and Manhattan in New York City. It was an accomplishment of mythic proportions requiring new technologies and new engineering.

In its day, the Brooklyn Bridge was the longest suspension bridge in the world with the length of the main span measuring 1,595 feet long. Its towers were once the tallest structures in the city. The design was imaginative: Artists said the Gothic-influenced Brooklyn Bridge demonstrated that aesthetics and technology could coexist. It so inspired the poet Hart Crane that he chose his apartments for their view of the bridge. His masterpiece is the book-length poem "The Bridge."