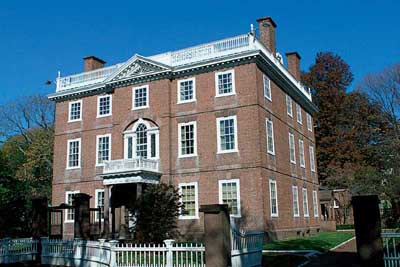 © Providence Warwick Convention and Visitors Bureau. A three-story 18th-century redbrick with white trim is representative of the famously restored structures on the "Mile of History."

If you're touring Providence, Rhode Island, and its antique treasures, the best place to start is Benefit Street, also known as the "Mile of History." The best time to visit Benefit Street is during the Providence Preservation Society's annual June Festival of Historic Houses. Benefit Street was established in 1756 and became home to Providence's well-to-do merchants. During the next two centuries, however, it crumbled into a tenement slum until the Preservation Society took action to turn the neighborhood into a model for historic restoration worldwide. Today, almost all of the buildings along the "Mile of History" have been restored, giving the street the architectural flavor of colonial times.

While many of the building interiors are off-limits to the public, visitors can take in the historical ambience of this collection of homes and businesses. One exception is the John Brown House Museum, just around the corner from Benefit Street, which is open for tours. Not to be confused with John Brown the abolitionist, Providence's John Brown was a politician who completed the mansion in 1788. John Quincy Adams proclaimed the house "the most magnificent and elegant private mansion that I have ever seen on this continent."

Benefit Street was also the haunt of authors Edgar Allen Poe and H. P. Lovecraft. Less unsettling denizens have included the patriots at the Old State House on Benefit Street, where Rhode Island declared its independence from the British Crown two months before the nation's founders did so.

10 Strange Buildings Where You Can Spend the Night
'Witness Trees' Testify to History, Embody Hope for Visitors
Family Vacations: Rock and Roll Hall of Fame and Museum