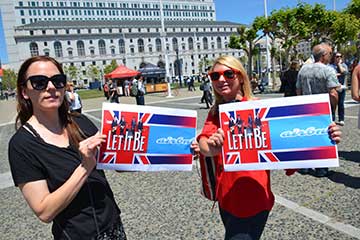 Two women hold 'Let it be Airbnb' signs at a rally to support home sharing, or the renting out of extra bedrooms in homes. The city is considering a bill to regulate home sharing.
© Steve Rhodes/Demotix/Corbis

The highest-profile case against Airbnb is happening in New York City. To operate a hotel in New York, you need a permit, which costs money. To get that permit, you need to ensure that your building and rooms are up to code, which also costs money. And every time a guest checks in, you pay taxes on that income. By contrast, if you rent out your New York apartment using Airbnb, it costs you almost nothing.

Airbnb is popular enough in New York that hotel owners have taken a hit and brought their case to state attorney general Eric Schneiderman. According to a 2010 New York law, it's illegal to rent out your apartment for less than 30 days if you aren't present in the apartment. Many Airbnb hosts in New York rent out their apartments when they themselves go on vacation, making all of those temporary transactions illegal [source: Abbruzzese and Plautz]. The attorney general subpoenaed Airbnb to hand over its database of New York hosts, but as of 2014, Airbnb was fighting the request in court [source: Schneiderman].

Instead, Airbnb has vowed to police its own users, deleting listings and banning hosts who appear to be running "illegal hotels" [source: Abbruzzese and Plautz]. The profile of an illegal hotel would be an individual — or a corporate entity — renting out several units in the same building, all with long-term availability.

Some landlords have gone as far as to evict tenants, sensing that they can make more money off short-term guests rather than long-term tenants. In Berlin, city officials attribute the huge rise in apartment rental rates to Airbnb [source: Monroe].

In San Francisco and Portland, Airbnb has come under fire for not requiring its hosts to pay local hotel taxes. In 2014, the company reversed its stance and agreed to automatically charge a 14 percent hotel tax to all San Francisco guests and 11.5 tax to Portland guests [sources: Said, Rogoway].

In addition to fights over taxes and rental law, there have been some high-profile cases of Airbnb guests using their host properties for illegal purposes. For example, New York authorities uncovered a prostitution ring that rented apartments through Airbnb weekly and used them in lieu of hotel rooms [source: Sauchelli and Golding].

With a $10 billion valuation, Airbnb is getting bigger than some mainstream hotel chains. But if the company wants to attract more mainstream hotel customers, it will likely have to play ball with city governments and bring the sharing economy out of the Internet shadows.

Trust is an essential component of the sharing economy. When I told my wife that I was writing about Airbnb, she immediately questioned the safety of allowing a complete stranger to stay in your home. Personally, I hadn't even thought of it. I guess I've grown accustomed to trusting certain kinds of online relationships. I've bought and sold dozens of items on Craigslist and never had a bad experience. I've accepted lots of work assignments via email and trusted that I would be paid, even though I never met the editor in person or even spoke to them on the phone. In fact, we co-own a property outside of the U.S. that we rent out to tourists. We've been doing this for more than five years, and I've never met a single one of them face to face. I've also never had a problem beyond the expected annoyances of long-distance property management. From what I read, in more than 11 million Airbnb transactions, only a handful have resulted in theft, significant damage or illegal activities. It's nice to know that you can still trust people, even complete strangers online. It's also nice to know that Airbnb offers a free $1 million insurance policy on all belongings.