Browse the article How much did the National September 11 Memorial and Museum cost? 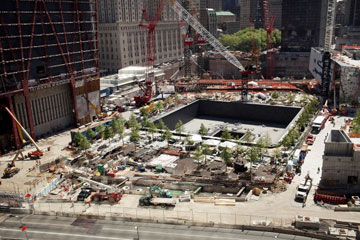 Construction continues at Ground Zero, where the World Trade Center once stood, in May 2011.
Spencer Platt/Getty Images

The National September 11 Memorial and Museum is being built to commemorate the lives lost during the terror attacks of Sept. 11, 2001. They're located at the former World Trade Center site, also known as Ground Zero, in New York City. The site was designed by architect Michael Arad around a theme of "Reflecting Absence." The site will be covered with trees, while two giant, recessed reflecting pools replace the footprints of the fallen towers. Ramps will allow visitors to walk down to the pools; around the pools are walls engraved with the names of those killed in the attacks.

Close by the reflecting pools will sit the museum atrium, a structure with a somewhat abstract shape. A spiraling ramp will lead visitors to bedrock and the foundations of the original World Trade Center towers, which have been incorporated into the exhibit space.

The memorial and museum were planned and funded by a nonprofit corporation formed specifically for that purpose. Both have fallen behind schedule, but the memorial is set to open for the 10th anniversary of the attacks, Sept. 11, 2011 [source: Rubinstein]. The planned opening for the museum will be in 2012. If you're planning to visit, you need to make reservations well in advance (the only way the memorial and museum could ever hope to accommodate the millions of annual visitors it expects to receive). Reservations can be made starting in July 2011, but those with family members who died in the attacks will get priority for reservations.

The planning and construction of the memorial and museum hasn't been without difficulty. The design was chosen through a competition, but some victims' family members protested various aspects of the design. The nonprofit foundation met early fundraising goals, but at that point there was little idea of how the memorial would look or how much it would cost. The initial cost estimate of just under $700 million eventually ballooned to over $1 billion, forcing a redesign to bring the budget under control [source: Feiden]. The final estimate of the cost, with just a few months before the memorial is to open, is $700 million [source: Hollander]. Dispute over the design has continued, and there have also been complaints about the salaries of the nonprofit corporation's executives, several of whom earn more than $300,000 [source: Karni]. The museum foundation will continue to raise money for upkeep, maintaining the collection of nearly 20,000 artifacts related to the attacks and assisting in the creation of new exhibits.