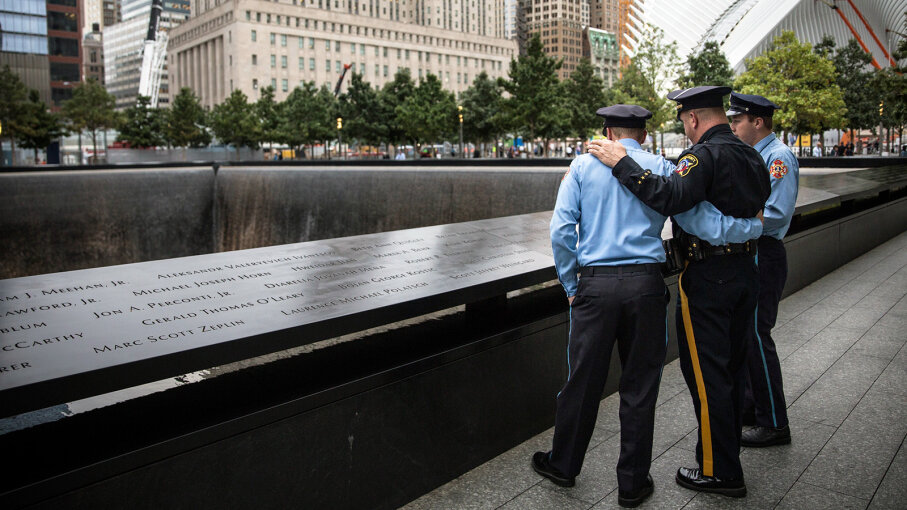 Three firefighters take a moment at one of the reflecting pools to remember a family member lost in the September 11 terrorist attacks. Andrew Burton/Getty Images

The New York City skyline will never again present the iconic contours it showed as the sun set on Sept. 10, 2001. But many years later, it's a far cry from how it appeared after the terrorist attacks on the World Trade Center on 9/11.

Half of the 16 acres (6.4 hectares) surrounding where the twin towers and other buildings of the World Trade Center once stood have been redeveloped as a business and commercial center. The other 8 acres (3.2 hectares) now house a memorial and museum. The National September 11 Memorial & Museum honors those who died on 9/11 and in the 1993 terrorist attack on the World Trade Center, when thousands were injured and six were killed after a bomb exploded in a parking garage. Among the 9/11 victims being honored are those who died as a result of the buildings collapsing, the first responders who were on the scene, and those near Shanksville, Pa., and at the Pentagon.

The Sept. 11 memorial consists of twin reflecting pools — each nearly an acre in size — with that stand in the footprints where the former twin towers once stood. Waterfalls cascade down the walls of each reflecting pool, streaming over the rims of the central chasms and vanishing into the depths below. Together they feature the largest manmade waterfalls in North America. Between them lies the aboveground portion of the museum, which houses exhibits demonstrating the tragic and heroic events that happened hand in hand on 9/11.

On the next page, we'll dig deeper into the design elements and construction efforts that went into erecting the memorial and museum.

Planning and Building the Memorial and Museum 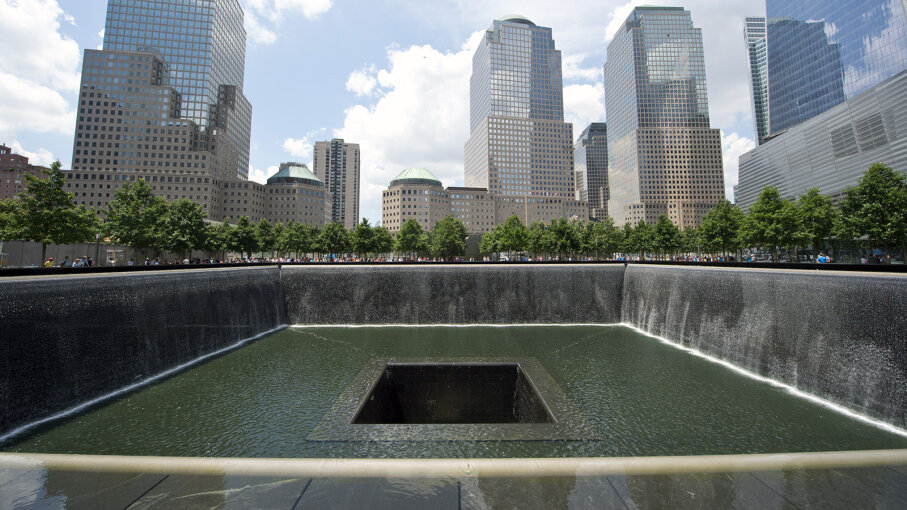 The two reflection pools at the memorial site sink into the footprints of the former twin towers and now serve as places of remembrance. James D. Morgan/Contributor/Getty Images

The design of the National September 11 Memorial & Museum is the work of architects Michael Arad and Peter Walker. Along with more than 5,000 other contenders, Arad and Walker submitted their design, called "Reflecting Absence," to the 2003 competition held to determine the look of the memorial. The judging panel was a 13-person Memorial Jury, which included the architect of the Vietnam Veterans Memorial, the curator of the Museum of Arts and Design, a 9/11 Memorial board member widowed in the attacks, a professor from the University of Massachusetts and the first deputy mayor of New York City, among others. The jury made its selection in January 2004 [source: The National September 11 Memorial & Museum].

The North and South Memorial Pools lie inside the footprints of the former twin towers. Located roughly between them is the pavilion entrance to the museum, designed by the Norwegian architecture firm Snøhetta. The architectural firm Aedas, working with Arad and Walker's design team, helped construct the memorial and the rest of the underground museum.

From the museum's glass atrium, visitors descend into a vast concrete sanctuary to tour the exhibits on display. Some are massive, like the Survivors' Stairs that allowed many to escape that day and the Last Column covered with remembrances during the cleanup efforts. Others are tiny, such as trinkets donated by the victims' families. Visitors can also see the location where the 1993 car bomb detonated and the slurry wall that held back the Hudson on 9/11.

And although now young, the 400-plus oak trees planted in the plaza are expected to grow to form a canopy over the memorial, providing a sense of stillness and calm fundamental to the memorial's goal: to allow visitors a place to mourn and reflect, to pay respects and find peace. A callery pear tree dubbed the Survivor Tree, which managed to survive the collapse in close proximity to the World Trade Center, has been nursed back to full health and will is on display.

In order to foster this urban forest, the design for the plaza features a suspended paving system. Between the roots of the trees and the museum, train station and other structures buried some 70 feet beneath the surface is a layer of loose soil — important for trees to thrive — rather than the compacted dirt commonly created during construction projects. Floating concrete tables give a safe walking surface around the plaza without squashing the dirt underneath and depriving the trees of access to nutrients and water. Thanks to this and other sustainability initiatives, the Memorial project hopes to attain Gold Leadership in Energy and Environmental Design (LEED) certification for sustainability.

But the journey from blueprint to building hasn't been without its ups and downs. Learn about some of the problems that have plagued the memorial and museum over the span of a decade.

Controversies Surrounding the 9/11 Memorial and Museum 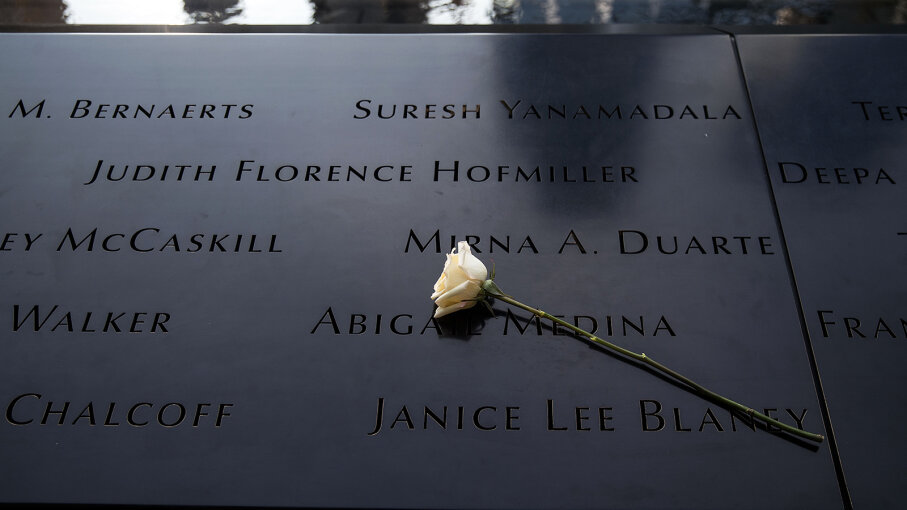 Flowers are left at the North pool memorial site before a commemoration ceremony for the victims of the September 11 terrorist attacks at the September 11 Memorial in New York City. John Angelillo-Pool/Getty Images

The National September 11 Memorial & Museum has been a very large and complex facility to construct, and given the emotional nature of the attacks themselves, it should come as little surprise that controversies and competing ideas dogged and delayed its completion. The numerous stakeholders involved all wanted a say in how the final structure would honor the victims.

Although the basic design was chosen in 2004, for example, it wasn't until September 2005, that it was fully developed. Construction efforts kicked off in 2006, but the project was almost derailed right off the bat when a number of factors caused the estimated cost to soar from $500 million to $1 billion [source: BBC]. The design plan for the museum and memorial then went through a revision and simplification process. Changes included:

These changes brought the estimated cost at the time back down to around $510 million.

Over the years, the price tag has continued to yo-yo. That $510 million again ballooned to more than $1 billion, according to one 2008 source [source: Feiden]. And from another, later source, the final estimate of the cost was about $700 million [source: Hollander]. Reasons for the increases, decreases and delays weren't often made clear by authorities, but increases in steel, concrete and oil prices were one noted cause for concern.

Another point of contention was the placement of names along the memorial. Preliminary plans were to simply alphabetize or randomize the names. But many pushed for a more complicated arrangement: The placement of the names on the panels could represent the victims' connections to each other. Firefighters from the same ladder would be listed together, and passengers and crew aboard hijacked flights would have their names near one another. And within such groupings, families and friends could make additional requests, so siblings or close colleagues could be placed near each other as well. It was a challenging task, with so many overlapping requests and design elements to satisfy, but eventually the organizational details were hammered out to most people's satisfaction.

Other hot-button issues that bubbled up over the years included the intention to build an Islamic Cultural Center and prayer space near the site of ground zero and the plan to display what has become known as the World Trade Center cross inside the museum space. But the development of the 9/11 tribute marched on despite these controversies.

On the next page we'll cover what you can expect to see if you visit the National September 11 Memorial & Museum.

Security measures are being taken very seriously at the museum and memorial. Visitor screenings are similar to U. S. airport security procedures, and vehicle inspections are routine as well. A vast array of closed circuit cameras canvas the facility and other buildings built on the former World Trade Center site. The area also has its own dedicated police force.

Paying a Visit to the Memorial and Museum 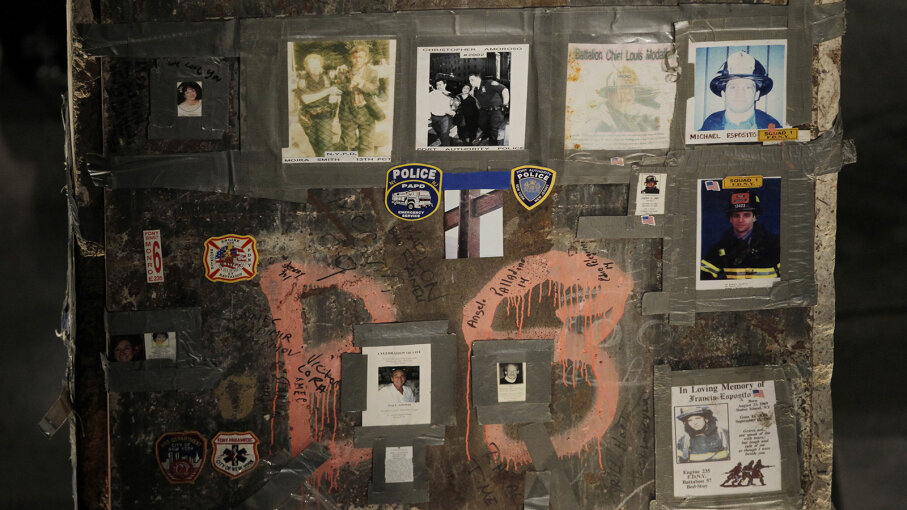 The last column recovered at the World Trade Center site was the center piece at the opening ceremony for the National September 11 Memorial Museum at ground zero May 15, 2014 in New York City. Drew Angerer/Getty Images

The National September 11 Memorial drew big crowds when it opened to the public on Sept. 12, 2011, following a special dedication ceremony for the families of the victims of 9/11 on the 10th anniversary of the attacks. In order to accommodate the crowds and ensure the safety of visitors, the facilities were highly monitored by law enforcement officials, and all tickets had to be reserved in advance online.

When they arrive, visitors are drawn to the two large reflecting pools, which cover about an acre apiece. There are 2,983 names inscribed along the bronze parapets that ring the four walls of the North and South pools [source: The National September 11 Memorial & Museum at the World Trade Center Foundation, Inc.]. The easiest way to find a particular name is to look it up online before a visit. Those people whose deaths were linked to the World Trade Center North, Flight 11 and the attack on Feb. 26, 1993, are listed at the North Pool. Those whose deaths were linked to the World Trade Center South, the first responders, Flight 175, Flight 77, Flight 93 and the Pentagon encircle the perimeter of the South Pool.

The foundation's Web site provides a comprehensive searchable database, and once you find the name of a person you're looking for, it provides the location of the name on the memorial and some basic biographical information about the person, often including a photo of him or her and links to any requested neighbors among the other names.

The museum officially opened to the public on May 21, 2014. One of the first sights visitors see is the Wall of Faces. Each of the nearly 3,000 people killed in the 2001 (and February 1993) terror attacks is pictured in a mural stretching around the entrance and out of view.

Thousands more photos, personal artifacts and biographical information of the men, women and children who died are on display, and many friends, relatives and colleagues who knew the victims personally have recorded oral remembrances as well. The museum also relates the tale of the twin towers, with wreckage from the debris illustrating these two iconic edifices' narratives from dawn to dusk.

For more information, visit the links on the next page.