Past visitors to the Carnegie Museum of Natural History's diorama "Lion Attacking a Dromedary" probably marveled at its lifelike depiction of lions attacking a man riding a camel. Little did they know that the animals weren't the only taxidermy pieces featured in the display. In fact, a recent gruesome twist revealed that the terrified man, while mostly artificial, secretly harbored a human skull, right down to his decidedly authentic teeth. But no one knows where the skull came from.

Created in the mid-1800s by French taxidermist and naturalist Edouard Verreaux, the diorama was acquired by Carnegie Museum of Natural History in 1898. It was displayed for many decades before anyone suspected that anything was amiss. "Early 1990s conservation records indicate that conservators suspected the teeth in the human mannequin to be real," explains assistant curator Erin Peters, Ph.D., in an email interview. But there was much more than that in the reality department.

When the diorama was taken off exhibit in 2016 for restoration and research purposes, researchers made the critical discovery of the human skull, thanks to a CT scan. Not surprisingly, they became even more interested in the rest of the construction, which inspired a comprehensive set of X-rays. "We found that each of the animals has a skull along with other bones, and there are no other human remains," she says. The diorama was originally called "Arab Courier Attacked by Lions" but was renamed last year "Lion Attacking a Dromedary," a direct translation of its original French title. It was back on display in late January 2017.

The Verreaux family (father Jacques, with sons Edouard, Jules and Alexis) famously known for their Parisian taxidermy business, Maison Verreaux, made many trips abroad to acquire tens of thousands of specimens, most of which were sold to museums and private collectors. These items included birds, plants and mammals, as well as the skulls and skeletons of African tribal people, often stolen from cemeteries.

The Carnegie exhibit is merely the latest in Verreaux-created incidents, and a drop in the bucket compared to that of "El Negro," an African chief whose body was stolen from his grave mere hours after the brothers attended his funeral. The taxidermists stuffed his body with vegetable fibers and otherwise preserved him, and he went on display about 50 years later in the Darder Museum of Natural History in Banyoles, Spain. He was finally returned to his homeland in 2000 for proper burial, following much pressure on the museum.

Other than seriously questionable acquisition habits, however, there are few other similarities between the Carnegie skull and El Negro. "In the case of the Botswana man, the full human body was prepared as a taxidermic specimen, where our diorama features a skull (with teeth) that was plastered and painted," Peters says, noting that including bones was a common practice in taxidermy at the time to help accurately shape parts of the mount. "In this way, the methods used for the human are more similar to the camel and lions in our diorama than to the Botswana man."

However, experts at the Carnegie museum are stuck between a rock and a hard place. "We do not know how old the skull is or approximately where it came from," Peters says. This makes sending the skull back home virtually impossible, given the limited information.

For the moment, the group is continuing to comb through archival information for further insights. So far, these efforts have produced significant information about the beginnings of this historic piece. Peters says that researchers found a stereoscopic image of the diorama on display in the 1867 Exposition, in French archives. And there were some differences from the diorama that is on display in the Carnegie museum. "The image shows the rider in a significantly different position – he is more upright, and his arm with the blade is held high over his head showing he will stab downward toward the male lion," Peters says.

The Verreaux brothers and their questionable ethical tendencies have also inspired the museum to DNA test the now-extinct Barbary lions featured in the diorama, just to make sure they're legit. If they aren't? Well, that'll be something to roar about.

Now That's Interesting
With hundreds, even thousands of centuries-old remains living in museums around the world, many are now grappling with the issue of how to respectfully care, study, display or even return them.

Here's What Happens When You Swallow a Leech

Barbers Across the Globe Are Using Fire to Style Hair 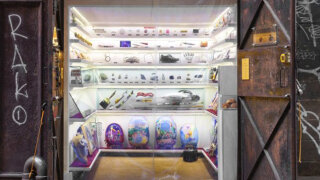 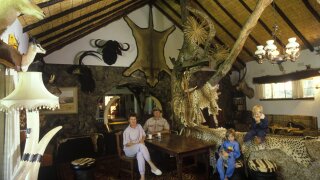 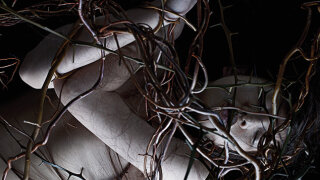 Entropy: The Invisible Force That Brings Disorder to the Universe
March 27, 2020

The Defense Production Act Was Designed for Emergencies Like Coronavirus
March 27, 2020