Famous Artwork in the Louvre 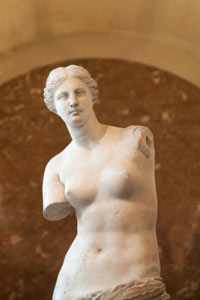 The Venus de Milo in the Louvre.
Grant Faint/Getty Images

Without question, the most famous work of art stored in the Louvre is Leonardo da Vinci's Mona Lisa. Also known as La Joconda, it's long been the most popular work at the museum. The Mona Lisa receives mail at its own box at the Louvre, and the painting has become a symbol of national pride and heartache. In 1910, a man whose fiancée had jilted him shot himself in front of the painting [source: Garnier]. The following year, a custodian at the museum stole the painting, leading to an international outpouring of grief at the loss -- and anger at the Louvre's directors for not protecting it more carefully. The Mona Lisa has also been the target of anger: Several visitors to the painting have thrown acid and stones at the image and sprayed red paint on it.

The Venus de Milo, the 2nd-century B.C. Greek statue of Aphrodite now famously missing her arms, isn't far behind the Mona Lisa in fame. The statue was found on the island of Melos in 1820 by a farmer and two French naval officers among the buried ruins of an ancient amphitheater. The statue quickly made her way to France and into the Louvre, where it remains as a centerpiece of the museum today.

Another statue, found 60 years after the Venus de Milo, was discovered in what the museum considers "countless" pieces on the island of Samothrace in 1950. The Winged Victory of Samothrace, a colossal, headless statue of the winged Greek goddess Nike, is believed to have been destroyed by an earthquake sometime in the millennia following her creation around 190 B.C. [source: The Louvre]. Originally, the statue stood poised atop a hill overlooking the Aegean before it was removed to the Louvre, where it was restored. In 1950, the statue's right arm was discovered, leading to the last phase of restoration.

Dating even further back in antiquity is the Code of Hammurabi. This seven-foot (2-meter) basalt monolith is topped with the recognizable bas relief of King Hammurabi, ruler of Babylon in the 18th century B.C., and the god Shamash, with whom the king consults. The pillar was unearthed in 1901 and serves as the basis for eye-for-an-eye legal thought.

There are, of course, too many worthy artworks to list here, from Eugène Delacroix's Liberty Leading the People, to Theodore Gericault's The Raft of Medusa. You must see the art in the Louvre yourself to fully appreciate the museum's worthiness as seat of the art world.