History of the Louvre: The Birth of a Museum 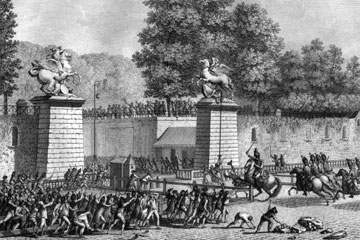 The sacking of the Tuileries Palace at the Louvre during the revolution on July 12, 1789.
Hulton Archive/Getty Images

By the mid-17th century, France had become aware of its burgeoning cultural legacy. As a result, the country established academies that served as governing bodies to nurture and guide French artistic pursuits. The Académie de Peinture et de Sculpture, which governed the visual arts; the Académie Française, the official body of the French language; and the Académie des Inscriptions et Belles-lettres, which nurtured humanities like history and philosophy, were all founded to further French culture.

When the French royal family left the Louvre vacant in favor of Versailles, the three academies moved into the buildings, establishing the Louvre as the seat of culture in France. The academies established the salons -- what we would compare to modern exhibits -- of cultural artifacts and works of its members. The salons added a vital aspect to what would become a lasting legacy of the Louvre: the sharing of art and culture with the French public. No longer were artistic troves solely for the enjoyment of the monarch and his court. The early salons drew immense crowds.

The concept of art belonging to all continued to be nurtured by the egalitarian spirit of the French Revolution, which lasted from 1787 to 1799. Under pressure from the Assemblée Nationale, the powerful French National Assembly organized in 1789, Louis XVI agreed to share the Palais des Tuileries and the Louvre with the French people as a "place for gathering together all the monuments of the sciences and arts" [source: The Louvre].

The Assemblée Nationale's mandate was clear: The Louvre's custodians and tenants must assemble a great museum within its walls. The Louvre opened as the French national museum (first as the Musée Français and then the Musée Central des Arts) in 1793, with admission free to all. Following the toppling of the monarchy, there would be a comparatively brief struggle for the museum after Napoleon came to power; he considered it his museum, even renaming it the Musée Napoléon [source: Melikian]. After the emperor's reign ended in exile in 1815, the museum was given its current name, the Musée du Louvre.

This egalitarian sentiment continues. Today, the Louvre admits the public free of charge on the first Sunday of each month and on the anniversary of the French Revolution, July 14. As ever, artists and students are offered free admission every day [source: The Louvre].