History of the Louvre: Early History 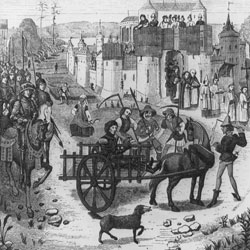 A Flemish captive is taken to the medieval fortress of the Louvre for imprisonment in 1214.
Hulton Archive/Getty Images

The Louvre began its storied history as a defensive fort on the western edge of medieval Paris. In 1190, the Capetian ruler of France, Philippe Auguste, had the fort constructed to standards of the time -- complete with a moat. Within a century and half, however, the Louvre no longer stood at the edge of the city; Paris had grown around and beyond the fortress. As the Hundred Years War between the English and French began in 1336, a rampart was constructed around the city, enclosing the Louvre far inside its walls.

It wasn't long before the former fortress began to attract the attention of members of the royal court. In the 14th century, the Louvre entered its second function -- that of royal residence. Charles V was the first French monarch to take up residence in the Louvre, which was suitably remodeled and expanded to make it fit for a king. The tradition of maintaining the Louvre as a residence was continued by Charles VI, but fell out of fashion after his death and successive monarchs constructed their own palaces elsewhere in the region.

The Louvre sat unused for 100 years, until François I reinstated Paris as the official seat of the kingdom. This began nearly a century of work on what would become a sprawling series of magnificent buildings, including the famed Palais des Tuileries [source: The Louvre]. Royals began to tap premier architects in France and elsewhere in Europe to oversee new wings and buildings and remodeling of old ones. That tradition has continued throughout the Louvre's existence and continues today, although architects from around the world now put their stamp on the museum with the same measure of honor their predecessors felt.

In the hands of Kings Louis XIII and XIV, the Louvre entered arguably its most magnificent phase of development as a palace residence to the French monarchs. Sumptuous halls and apartments were added, some of which remain today. After the completion of palace at Versailles in 1672, however, royals abandoned the Louvre for the new residence, leaving the museum unfinished. For a century, parts of the buildings sat without roofs, exposed to the weather. Before the end of the 17th century, however, the Louvre would begin the transition to its last and final incarnation -- that of home to the highest cultural accomplishments.