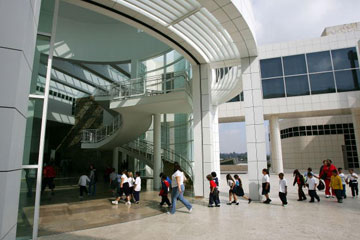 Image Gallery: Famous Landmarks The Getty Museum began as a small display in oilman J. Paul Getty's Malibu home, and today it has grown into one of the most extensive art collections in the world. See more pictures of famous landmarks.
David McNew/Getty Images

Outside, you face a jaw-dropping mountaintop view of the one of the world's great urban landscapes. Inside, you can gaze on Van Gogh's famous oil painting, "Irises," among numerous other art pieces and ancient artifacts.

Welcome to the J. Paul Getty Museum, a major cultural institution of Los Angeles and one of the most accessible and informative art museums in the world. Featuring unique architecture, intricate and ever-changing gardens, and a huge collection of paintings, manuscripts and photographs, the Getty has plenty to offer its visitors.

Its roots can be traced back to when oilman J. Paul Getty took a big risk by investing in oil fields in the Arabian Peninsula after World War II, but his bet paid off in a big way. By 1957, he was named the richest man in America [source: Encyclopedia of World Biography].

Getty was a longtime lover of art and wanted to share his passion with the world. In 1954, he opened a museum connected to his home in Malibu [source: History.com]. Twenty years later, he had the collection transferred to a replica of a Roman Villa that he'd had built nearby. The Villa now houses the Getty Museum's extensive collection of antiquities. Although Getty spent the last decades of his life in England, and died without getting to see the completed Villa museum, his vision went even further.

When he died in 1976, the billionaire industrialist left a large portion of his fortune to fund the museum and several art institutions connected with it. The bequest was worth $1.2 billion when, after some legal wrangles, it finally got to the museum in 1982 [source: History.com]. It grew to a peak of $6.4 billion in 2007, making the Getty one of the richest art museums in the world [source: Getty: Endowment Values]. The Getty continues to be operated by the J. Paul Getty Trust, which has spent hundreds of millions to enlarge the collection.

The trustees used the enormous bequest to construct the Getty Center complex in Los Angeles, ten miles from the original museum. Designed by modernist architect Richard Meier, the campus took more than 12 years to build and cost more than a billion dollars [source: PBS]. It opened in 1997. That same year, the Villa location in Malibu closed for a nine-year renovation. Together, the two parts of the Getty Museum offer visitors a wide-ranging and absorbing art experience.

Read on to find out why this wealthy art museum can also be a bargain for visitors.

The main Getty Museum attracts 1.1 million visitors a year, making it one of the most popular art museums in the country [source: Getty: Snapshot]. One reason for its appeal may be that, in an era of rising museum admission prices, the Getty is free. No tickets to buy, no reservations needed. There's a $15 parking fee, but even that's waived after 5 p.m., and public transportation is available [source: Getty: Visit].

A tram carries you from the parking area up to the hilltop campus, which is just off the San Diego Freeway in the Brentwood section of Los Angeles. When you step out, you come face to face with views of the Pacific Ocean, the Santa Monica Mountains, and the vast expanse of L.A.

You'll find the five main pavilions that house the museum's collection surrounding a central courtyard. The buildings are connected by glassed walkways, so you can enjoy the view again while you move from one to the other. One of the outstanding features of the museum is the natural light that shines through each pavilion's computer-controlled louvers and allows viewers to look at paintings in the same light in which they were created (most of the works were painted before electric lighting).

Part of the 110-acre campus is given over to a series of gardens. The Central Garden was designed by California artist Robert Irwin, who fashioned everything from the handrails to the huge azalea rings and waterfall to create a unique, artistic experience in nature [source: Getty: The Gardens].

The Getty makes an effort to accommodate visitors. There's a cafe that offers lunches and snacks in an outdoor terrace setting. There's also a restaurant available for more formal dining, but it usually requires reservations. The museum includes a family room that lets kids create manuscripts or sculptures and offers educational programs for everyone. You can also sign up for daily tours of the architecture and gardens at no cost.

If the museum at the Getty Center is a prime example of modern architecture, the Getty Villa exemplifies a much earlier time -- 79 A.D. to be exact. That was the year Villa dei Papiri in the ancient Roman city of Herculaneum was buried in the eruption of Mount Vesuvius [source: Getty: Architecture]. When builders created a replica of that villa in Malibu, the architects included other elements from ancient Rome, such as bronze lanterns familiar to residents of Pompeii and a 450-seat outdoor classical theater.

Admission to the Villa is also free, but you will need a timed ticket, which can be obtained in advance via the museum Web site. The cafe at the Villa offers Mediterranean dishes, including pizzas, pastas and risotto.

As does the museum at the Getty Center, the Villa offers plenty of family activities. Kids can explore vase-painting techniques in the Family Forum and imagine themselves part of a Greek vase in the shadow-pose area.

In the next section, you'll learn about the heart of the Getty: its world-class art collection.

If looking at art makes you wish you could try it yourself, the museum at the Getty Center encourages aspiring artists in its sketching gallery. A museum guide will supply free sketching paper, drawing pencils and charcoal. Choose a displayed painting or sculpture as a model and see what you can do.

Founder J. Paul Getty was eager to share his appreciation of great art, and the Getty Museum presents its collection in a viewer-friendly manner at both the Getty Center and Villa locations. The Getty Center displays Western art among its modern architectural and garden setting, whereas the Villa focuses on ancient Greek and Roman art in a Roman-inspired setting. Many of the works in both locations are grouped by theme instead of by time period, so visitors can learn about trends and influences.

From the central courtyard, you can wander into any of the four pavilions that house the museum's permanent collection, or visit the Special Exhibition pavilion, which features rotating exhibits. There, you might take in "Leonardo da Vinci and the Art of Sculpture," for example, or an exhibit that shows how drawings in the Getty's collection were made and how they have been studied and cared for.

The North pavilion houses the museum's collection of illuminated manuscripts. In the age of the e-book, this collection highlights the effort that went into producing a book during the Middle Ages.

The ground floor of the South Pavilion contains a collection of French decorative art from the 17th and 18th centuries. In a separate exhibit upstairs, you can look at Odilon Redon's pastel portrait "Baronne de Domecy," the background of which depicts a flood of dreamy flowers.

In the West Pavilion you can view a portion of the museum's photography collection, which includes more than 60,000 images spanning the history of photography. Pictures range from Thomas Fenton's portrait of a Crimean War commander of 1855 to Andy Warhol's 1977 Polaroid of Liza Minnelli. It also holds 19th century paintings and Italian art from the 18th and 19th century.

Baroque artists are the focus of the East Pavilion. Among the highlights is Peter Paul Rubens' 1615 oil painting, "The Entombment," a vivid depiction of Christ after the crucifixion.

The 23 galleries at the Villa display only about 1,200 of the museum's vast collection of 44,000 objects from antiquity [source: Goodale]. The galleries are organized by theme, focusing on topics such as "Gods and Goddesses," "Dionysos and the Theater" and "Stories of the Trojan War". The approach helps visitors to understand the artworks in the context of their use in classical societies. Although the permanent collection includes mainly Greek, Roman and Etruscan objects, the special exhibits touch on other areas, such as the art of the Aztecs.

One of the highlights of the collection is "Victorious Youth," a Greek statue from 300-100 B.C. and one of the few life-size Greek bronzes still in existence. Its realistic form gives the viewer a unique connection to the people of another era.

The collection ranges back even further, including Etruscan candlesticks from 500 B.C. and a Cycladic storage jar from 3000 B.C. To put it all in context, you can visit the TimeScape Room. Here, interactive exhibits focus on time, place and artistic style in the ancient Mediterranean.

Read on to find out where you can get more detailed information and plan your visit to the Getty Museum.

To carry out J. Paul Getty's vision of promoting art for everybody, the Getty Center is also home to related institutions that push art education, conduct research and train art museum professionals. The Conservation Institute, for example, provided advice on how to conserve ancient human footprints in Tanzania.

10 Strange Buildings Where You Can Spend the Night
'Witness Trees' Testify to History, Embody Hope for Visitors
Family Vacations: Rock and Roll Hall of Fame and Museum