Browse the article How the Guggenheim Museum Works 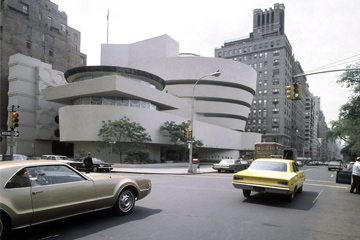 The Guggenheim Museum at 89th Street and Fifth Avenue in New York City on May 15, 1968. See more pictures of American landmarks.
AP Photo/JK

Take a stroll down Fifth Avenue on New York's Upper East Side and eventually you'll find yourself staring up at a curving, cylindrical structure that looks as if it was teleported from another world.

Don't worry -- the aliens haven't landed. That oddly shaped building is the famous Guggenheim Museum, one of several Guggenheim museums that have opened over the years. A lightning rod for controversy when it opened in the fall of 1959, the distinctive building designed by famed architect Frank Lloyd Wright is today considered one of the most important works of art and architecture ever created.

As a result, it's one of the most popular destinations in New York City for culture-minded visitors seeking museums and tours. Not surprisingly, it's often on the itinerary for family vacations, as parents wish to show their kids that art can be more than just the cover illustrations from the latest Sony PlayStation game.

In this article, you'll find out what you should know about the Guggenheim if you plan to make it a stop on an upcoming family vacation to the Big Apple. Over the next few pages, you'll find information about tours, the Guggenheim collection and even the spin-off Guggenheim museums outside of New York City.

Read the next page for essential Guggenheim information. 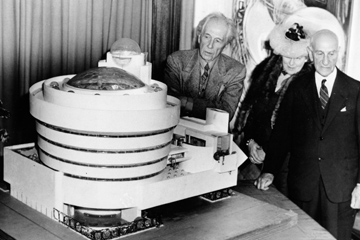 How did the Guggenheim get its uncommon moniker? It's named after Solomon R. Guggenheim, an American businessman, art collector and philanthropist whose Guggenheim Foundation commissioned design and construction of the museum, which opened in 1959.

When it first opened its doors to the public (after the deaths of Frank Lloyd Wright and its namesake, Solomon R. Guggenheim), the Guggenheim Museum immediately upended the notion that museums should be rectangular, classical, and conservative. Resembling a gigantic coiled ribbon, the spiraling Guggenheim redefined museums and even museum tours. Critics harped that the avant-garde design of the building robbed attention from the works of art housed inside.

The building was a challenge for other reasons as well:

New York Times art critic John Canaday labeled it, "A war between architecture and painting, in which both come out badly maimed" [source: Vogel].

Despite that and other criticisms, the Guggenheim's curators were able to devise methods of displaying collections in a way that appeased the art establishment and amateur art aficionados alike.

Today, visitors go on tours of the museum as part of art class assignments, to view special exhibitions such as "The Art of the Motorcycle" or simply on family vacations.

By the way, if you're considering a visit to the Guggenheim as part of a family vacation, here are some things to know: As of this writing, adults pay a flat rate of $18 to get in, slightly less for students and seniors, while children under 12 and museum members get in for free; headphones for audio tours are included in the admission price, too.

To learn about what's in the Guggenheim art collection, go to the next page. 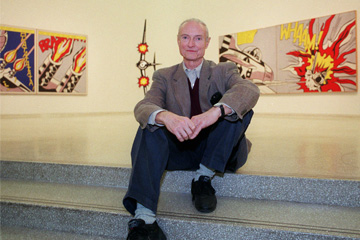 On the previous pages, we've talked about what the Guggenheim Museum is and how it came to be. Here we'll take a look at just what it is that you'll find there.

The assorted Guggenheim museums and tours vary in what they offer to visitors. Special exhibits and the international flavor of the museums mean you'll take in a different experience from one museum to the next and even at the same museum when visited over time. In addition to New York, the Guggenheim has locations in Venice, Italy; Bilbao, Spain; Berlin and one is under development on Saadiyat Island, Abu Dhabi, which is part of the United Arab Emirates.

The core Guggenheim holdings are, according to the museum's own Web site, "essentially the story of several very different private collections. Central among these are Solomon R. Guggenheim's collection of nonobjective painting premised on a belief in the spiritual dimensions of pure abstraction; his niece Peggy Guggenheim's collection of abstract and Surrealist painting and sculpture; Justin K. Thannhauser's array of Impressionist, Post Impressionist, and early modern masterpieces; and Count Giuseppe Panza di Biumo's vast holdings of European and American Minimalist, Post-Minimalist, Environmental, and Conceptual art" [source: Guggenheim.org].

Young children dragged along on family vacations might not have yet developed an appreciation for the distinctions between "nonobjective, Minimalist, and Post-Minimalist" works, but could almost certainly find something to like about the Family Tour and Workshop programs.

The Guggenheim has guided family programs and also offers "Family Activity Packs" filled with suggestions of things to do while at the museum, along with materials (picture books, sketch pads, pencils and so on) to accommodate young artists.

For the most up-to-date information on exhibits, tours and how much admission will cost you, it's always a good idea to call ahead of time or check out the museum's Web site.

So if you're looking for a fascinating, educational and fun family vacation spot, museums like the Guggenheim can offer an enjoyable approach to art while providing a cool escape from the outdoors if you happen to be visiting New York on a stifling hot summer day.

For more information about the Guggenheim Museum and other related topics, follow the links on the next page.