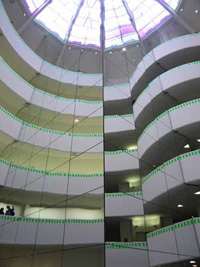 The impressive and often disorienting interior of the Guggenheim Museum.

"I need a fighter, a lover of space, an agitator, a tester, and a wise man...I want a temple of spirit, a monument!" said Hilla Rebay to Frank Lloyd Wright. Rebay was the art adviser to Solomon R. Guggenheim, and the collaboration of these three led to the creation of the fabulous Guggenheim Museum, now known for both its collections and its adventurous architecture./

Guggenheim chose New York City as the site for his new art museum. Wright had reservations about designing the museum for the already overcrowded, overpopulated city, but he reluctantly agreed to the project. The museum opened in 1959. The Guggenheim Museum remains an iconoclast. Viewed from Fifth Avenue, its exterior is an inverted cone with wide bands rising upward like a children's giant top. Inside, the museum contains an atrium and a spiral ramp where visitors view artwork from a perspective that can be dizzying.

Despite its impressive permanent collection of works by Kandinsky, Klee, Calder, Picasso, Rousseau, and many more, visitors sometimes find it a relief to return to the atrium. Wright's design will forever remain controversial, which might be one reason the museum has been so readily adopted by New Yorkers -- despite Wright's feelings that their city lacked merit.