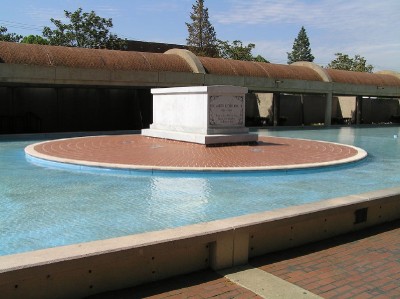 The King Center is a memorial to and final resting place of Martin Luther King, Jr.

Martin Luther King, Jr., was born in a modest, comfortable, Queen Anne-style home in the heart of Atlanta's "Sweet Auburn" district (the city's prosperous African-American downtown in segregated days). Visitors to the Martin Luther King, Jr., National Historic Site in Atlanta, Georgia, are reminded that the great civil rights leader could have lived a cozy, middle-class life as a respected man -- and never risked his life for his beliefs. Instead King spent the 11 years from 1957 to 1968 traveling over six million miles and speaking more than 2,500 times in support of civil rights for all Americans. He took part in protests, most notably the peaceful march on Washington, D.C., where he delivered his moving "I Have a Dream" speech.

The historic site evokes the memory of King's dreams. The visitor center has a helpful video and exhibits aimed at young visitors. The King Center, established by King's widow, Coretta Scott King, in 1968, features exhibits on King; Coretta Scott King; and Mahatma Gandhi. The center is the site of King and his wife's graves. He is entombed beside an eternal flame, but King's real eternal fire lives on in those who hear his message.