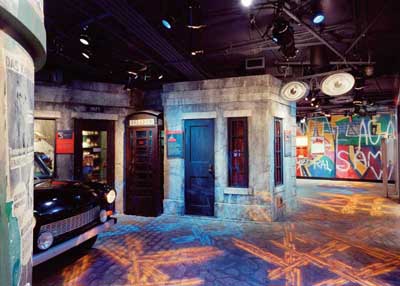 Learn firsthand how a spy operates at the only museum in the United States dedicated to the world of espionage. Upon your arrival at Washington, D.C.'s International Spy Museum, you'll adopt a "cover" and receive a new identity. You'll need to remember this information to see how well you perform as a spy, particularly when border guards throughout the museum interrogate you.

You'll learn how spies disguise themselves with fake hair and face-altering makeup and how Hollywood helped develop ingenious disguise techniques for the CIA. Some of the family programs include workshops on disguise-making, as well as on making and breaking secret codes and inventing concealment devices. On display are classic hidden spy craft tools such as buttonhole cameras, lapel knives, lipstick pistols, and hollowed-out coins concealing microdots.

Historical exhibits discuss espionage techniques used in the past, when spies shot secret messages into forts using bows and arrows and hundreds of thousands of pigeons flew secret messages across enemy lines. Other exhibits include a re-created tunnel beneath the divided city of Berlin during the Cold War and an exhibit on escape and evasion techniques in wartime.

Learn more about the variety of things to do and places to see in Washington, D.C. and other exciting locales: