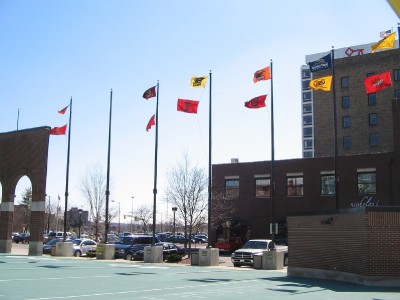 Some exhibits at the College Football Hall of Fame in South Bend contain sports equipment and artifacts from behind-the-scenes of the game.
©Jeff Clark.

South Bend, Indiana, with a population just over 107,000, probably would have remained an ordinary college town were it not for Notre Dame's Fighting Irish football team and the countless legends it has engendered. Thus, it seemed logical when the College Football Hall of Fame moved from Ohio to the downtown district of South Bend in 1995. The Hall of Fame today is highlighted by an unusual architecture of ramps, spirals, and tunnels. The main museum hall is underground.

Visitors wind around a giant circular staircase to visit the Hall of Honor. They then branch out to exhibits such as the Great Moments Kiosk and the Pantheon, which showcases recipients of especially prestigious awards, equipment displays, a strategy clinic, and a practice field where visitors can pass, block, and kick. The Pantheon's centerpiece is the Stadium Theater, a re-creation of a live football game that makes visitors feel as if they are on a stadium field among the players, cheerleaders, and 106,000 screaming college football fans.

The first Hall of Fame inductees were selected in 1951. Among the original 54 legends inducted were Walter Camp, Jim Thorpe and Red Grange. Today, more than 900 college football players and coaches are enshrined.