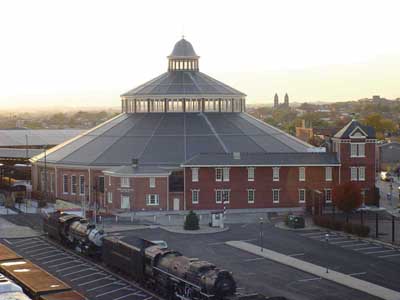 Anyone who has ever played Monopoly knows the B&O Railroad. But they may not know that "B&O" stands for "Baltimore; Ohio," a railroad company that at one time ran trains from the Ohio River to Baltimore and was one of the most important freight and passenger lines in the country. The B&O Railroad Museum is listed on the National Registrar of Historic Landmarks. It's situated in Baltimore, the final destination of the B&O, and it is the largest railroad museum in the western hemisphere.

The museum features a large collection of railroad cars and memorabilia. Trains are displayed in a brick roundhouse and on outdoor platforms. Kids can climb in a caboose and a World War II troop sleeper car, participate in a pump car demonstration, and watch large toy trains make their way through an outdoor garden layout.

Two smaller toy trains are set up in an old passenger car, and yet another railcar has been made into a theater that shows short films about trains. Other displays include the stationmaster's quarters, a waiting room, a ticket office, and a freight house. During warmer months, kids can play on an outdoor wooden train set.