by Jessika Toothman
Prev NEXT
6 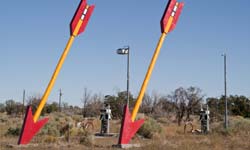 The Twin Arrows are just one of the many quirky sights you can see along Historic Route 66. Perhaps someday those arrows will end up in the Smithsonian, too.
©iStockphoto.com/suesmith2

The collectors at the Smithsonian have worked tirelessly over the years to document all aspects of American culture. In the year 2000, they even thought to grab a chunk of Route 66, commemorating the social impact engrained within the many miles of the celebrated scenic U.S. highway, as well as the quirky essence of roadside-attractions that distinguished it from others of the era.

The 50-foot-long (15-meter-long) stretch of concrete that's now in the custody of the Smithsonian came from the Oklahoma portion of Route 66, which all told, runs from Illinois through Missouri, Kansas, Oklahoma, Texas, New Mexico and Arizona, before ending in California. It meanders through main streets and rural stretches alike. During its heyday, the road served a number of distinct populations in unique and important ways.

Route 66 symbolized a sense of freedom for many people escaping the dismal economic situation of the rest of Depression-era America, earning it a nod from John Steinbeck in "The Grapes of Wrath." In 1933, thousands of young, out-of-work laborers were put to work completing the many remaining unpaved portions of the highway. It was finally finished in 1938 -- just in time to assist appreciably in the war effort of World War II.

Military traffic was heavy during the wartime years, and afterward, Americans took to the open road in droves, some relocating, some road-tripping. Traveling for pleasure -- a concept not common before the war -- became a booming trend, and amenities and attractions sprang up all along Route 66 to entertain and wow the deluge of sightseers.

Route 66 is still 85 percent passable, and many advocates are working to preserve its place in history while promoting its preservation into the future [source: Gambino]. But in the event the famed route is lost, a chunk of it will always be stashed safely away at the Smithsonian.