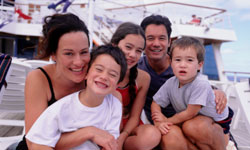 According to the American Society of Travel Agents (ASTA), at least two-thirds of agents who made travel arrangements for family reunions said cruises were the most popular destination [source: Runice]. No wonder. With cruise ships departing from 22 ports in the United States and Canada, you can find one within driving distance of many U.S. cities.

A short voyage on a cruise liner is one of the easiest options for a family reunion. Brand-name cruise ship lines like Carnival, Royal Caribbean and Holland America specialize in catering to large groups like reunions with special deals. Carnival, for example, offers perks like private cocktail parties for groups who book at least eight staterooms [source: Carnival]. These floating resorts have activities for everybody, ranging from rock-climbing walls and roller-blade tracks to cooking classes and guest lecturers. Royal Caribbean offers a program called Royal Reunions that offers special activities and gifts for family reunions [source: Royal Caribbean].

Costs range depending on the itinerary, length of voyage and the size of the group, but some cruises can be as cheap as several hundred dollars per person. They're a particularly good deal for families because parents and kids can share a single large stateroom [source: Cruisecheap.com].