by Maria Trimarchi
Prev NEXT
1

Bring up Old Resentments or Fights

If there’s resentment brewing between you and a family member, the best you can do is focus on your end of the problem and try to just let go of it. ©iStockphoto.com/Luba Nel

Being around family can bring up your childhood memories, good and bad. A comment from your mother, for example, sounds harmless enough to your cousin, but leaves you feeling and acting like your 12-year-old self. Those family patterns are easy to fall into without even realizing what's happening because they're ingrained behaviors; and when you're in those situations, you feel like your inner child has taken over, and she's upset. And it's not just the stuff of childhood that bother us; that 12-year old is also fanning the flames of fights long ago (and that fight between your brothers from just a year ago). Instead of indulging in those resentments and arguments, mental health experts suggest we practice letting things go -- something your teenage self might not have been able to do.

I've never attended a family reunion, and I'm actually not sure that I'd recognize most of my extended family members, beyond aunts, uncles and cousins if I saw them at a family gathering or at the corner store. But I made a few mental notes while researching and writing this article: Plan ahead, logistically but also and maybe more importantly emotionally, and have just one glass of wine. 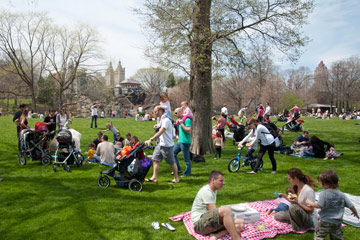