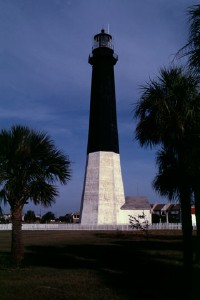 The Tybee Island Lighthouse stands watch over a once remote barrier island, which has become one of the most popular summer vacation spots along the Georgia seacoast. See more lighthouse pictures.
©2007 Joyce and Ainsley Dixon

Visitors to Savannah, Georgia, one of the loveliest and most historic towns on the southeastern coast, often drive out on the concrete causeway to spend a day at the beach on Tybee Island, on which stands the Tybee Island Lighthouse.

Once on the island, these visitors encounter bird-filled salt marshes, miles of sand and sun, and a main boulevard lined with enormous oaks and picturesque sabal palms. On a quiet side street on the north end of the island, near old Fort Screven, sits the Tybee Island Lighthouse, a vintage brick structure that towers massively over the surrounding homes and beaches.

The Tybee lighthouse site dates back to the Colonial period. Shortly after General James Oglethorpe established the colony of Georgia in 1732, the local authorities ordered that a lighthouse be constructed on the barrier island. The light would help sailing vessels on their final approach to Savannah.

Completed in 1736, the first lighthouse was destroyed by fire only five years later. The second structure was built too close to the shoreline and was threatened by beach erosion. It was then destroyed in 1861 by retreating southern troops shortly after the Civil War began.

Finally in 1867, two years after the war was over, the current structure -- an octagonal brick lighthouse -- was completed. The bottom 60 feet of the damaged lighthouse were restored, and another 94 feet were added, making the new building 154 feet in height.

At that same time, the tower was outfitted with a 9-foot-tall, state-of-the-art Fresnel lens that gave the light a visible nighttime range of more than 18 miles. All who saw it knew the welcome entrance to the Savannah River was just to the north of the light.

Tybee Island Lighthouse is a short and pleasant stroll from nearby beaches. When the Georgia summer sun is merciless, the cool tower on Tybee, which is also the site of a small lighthouse museum, is just the place to go.