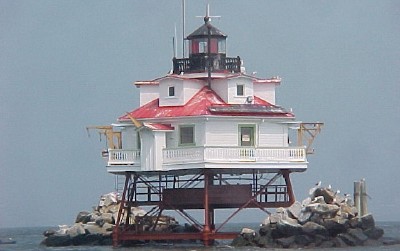 The light's base was created with a type of construction that secures the building to the ocean floor, allowing it to sit surrounded by water. The light indicates the presence of the treacherous shoals upon which Thomas Point Light is located.

Geographers have often described the 190-mile-long Chesapeake Bay as the remnant of an immense river valley. Once the basin of the Susquehanna River, this lowland area in Maryland gradually flooded as ocean waters rose at the end of the Ice Age, around 15,000 years ago.

What this means for recreational and commercial vessels today is that the Chesapeake Bay waters are often very shallow, and the bottom is covered with thick and potentially dangerous shoals of mud, sand, and silt.

If a ship veers even slightly off course from one of the main channels, it can find itself stranded far from shore on a flat shoal just below the surface. In even

a modest storm, this can be a fatal situation for the captain and crew. Hence, there is a serious need for reliable lighthouses in Chesapeake Bay, both onshore and offshore, to indicate the presence of these natural hazards.

The light and the two-story lighthouse keeper's residence are part of the same structure. It is a thing of beauty -- hexagonal in shape, cottagelike in appearance, with a porch running completely around the first floor. The roof is painted bright red, and the light room, painted black, rises from the top of the whole affair. 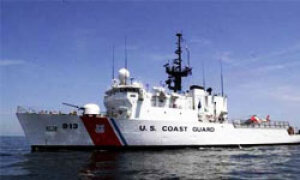