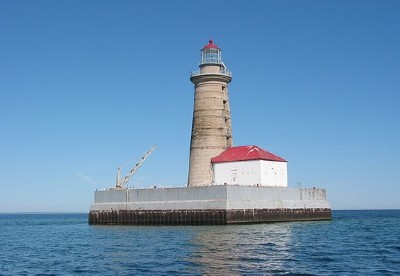 The Spectacle Reef lighthouse stands 95 feet tall and is located on a submerged reef about 11 miles east of the Straits of Lake Huron. See more lighthouse pictures.
©2007 Jim Kaiser

The Spectacle Reef lighthouse is not only a helpful warning to mariners of the rocky reef below but is also a major engineering feat.

When Ernest Hemingway was a boy growing up in the suburbs of Chicago, his father, a prominent physician, took his family to northern Michigan every summer. There they stayed at a small community by Lake Huron and spent their time hiking and fishing. Some of Hemingway's best short stories were inspired by those family vacations in the north country near the Canadian border.

While Hemingway was still small, there had already been a major lighthouse at nearby Spectacle Reef for more than 30 years. The Spectacle Reef lighthouse alerted Great Lakes mariners to an underwater reef that the U.S. Lighthouse Board once said was "probably more dreaded by navigators than any other danger now unmarked throughout the entire chain of lakes." The dangerous reef was a submerged rock platform about ten miles east of Bois Blanc Island, located in Lake Huron just east of the Straits of Mackinac.

in 1874 at the then-considerable cost of $400,000, to be "one of the outstanding [engineering achievements] in the lighthouse service as a whole."

In order to build the foundation for the lighthouse, an elaborate crib-like dam had to be built to allow workers a dry area in which to proceed with their task. Once the crib dam was raised and the lake water pumped out, the base of the lighthouse was carefully constructed with bolted, precut stones that were cemented together.

The circular lighthouse rose nearly eight stories above the level of the lake. Its powerful light warned mariners of the dangerous shallows, shoals, winter ice jams, and rock-encrusted reefs that lurked near the Huron narrows.

Even today, in the 21st century, the beacon of the Spectacle Reef lighthouse continues to light the darkness and alert vessels that death is as near as the rocks on which the lighthouse rests.