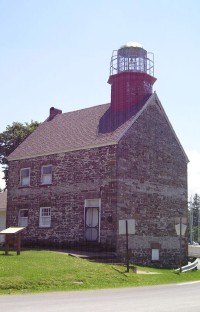 The Great Lakes -- including Lake Ontario, where Selkirk Lighthouse is located -- present the same dangers and challenges to recreational and commercial vessels as do the saltwater coasts.

Navigators must be aware of partially exposed reefs, sandy and muddy shoals, submerged rock formations, shifting channels, and prominent headlands. In bad weather, all of these hazards become even more perilous.

Such is particularly the case on Lake Ontario, known for its late-fall and early-spring storms and its sudden summer squalls. In winter months, the weather can be even worse.

The eastern lake region is frequently beset by bad weather, and that weather often develops quickly as fronts and storm lines meet and clash over the water. At such times, mariners can be in real trouble if they cannot identify hazards that exist along the coast.

It is no surprise, then, that one of the earliest lighthouses in the Great Lakes region was built at Selkirk Point near Pulaski, New York, on Lake Ontario. This unique lighthouse, near the mouth of the Salmon River, guards the lonely coast between Mexico Bay to the west and Stony Point to the north.

The Selkirk Lighthouse is one of the prettiest small lighthouses in the Great Lakes area. It was built in 1838 of native fieldstone and secured with white cement, which produced a compact two-story structure resembling a sturdy New England farmhouse. This is a lighthouse that would fit well in a Norman Rockwell or Andrew Wyeth painting. It has the same spare austere quality in its construction and in its physical appearance.

The light tower, painted black, rises from the lake shore side of the white tin roof. The original light involved the old reflector and oil-lamp system, but the tower eventually was fitted with a Fresnel lens.

The Selkirk Lighthouse remained active from 1838 until the eve of the Civil War, when, like many lighthouses both in the Great Lakes region and elsewhere on coastlines across the country, it was shut down because of

a lack of funds.

It was not used again until 1989, when its light was restored for the benefit of the myriad amateur mariners and fisher folk who arrive at the lake every summer. The light is privately owned and is available to the public for short-term rentals. Local lore has it that the lighthouse is actively haunted.