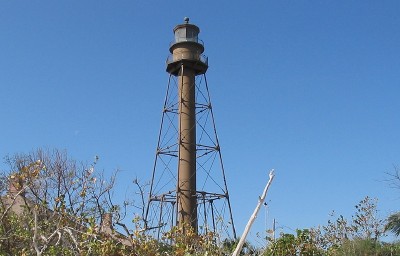 Sanibel Island is one of the jewels of the southern Florida coast. And the Sanibel Island lighthouse is an unusual tower that vacationers love to explore when visiting the island.

Located just a short drive from both Miami and Tampa, Sanibel Island is known around the world for the exotic seashells found along its white beaches. The island also occupies a strategic maritime location with respect to the mouth of the Caloosahatchee River, which drains the swamps east of Lake Okeechobee, and popular Charlotte Harbor to the north.

Offshore sandbars and shoals are of further concern to passing ships. For this reason, a navigational lighthouse has stood on the island for well over a century.

The story of how there came to be a lighthouse on Sanibel Island begins, as is often the case, with a shipwreck. In this case the very ship carrying the raw iron to build the lighthouse sank a few miles offshore after becoming grounded on a shallow-water sandbar.

Vessels from Key West steamed up the coast and were able to salvage some of the cargo. The lighthouse was completed during the summer of 1884.

The tower is unusual in construction. It rests, windmill fashion, within an interlocking iron framework that, in turn, is attached to concrete supports seated deep in the ground. A winding staircase leads over 120 steps to the lantern house, where a modern flashing light alerts passing ships.

Visitors will find both the lighthouse and its wild environs a delightful place to visit during the winter, well after hurricane season and well before the hot midsummer months.